Link: Video of the Press Conference 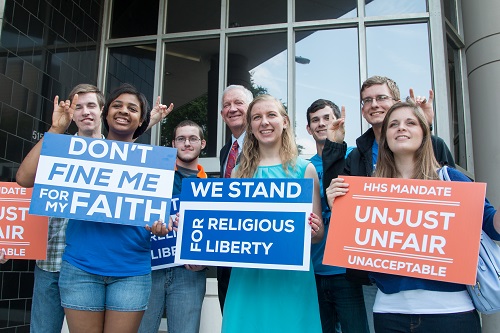 Washington, D.C. – Moments ago, two Texas Baptist universities were heard in court over their religious objection to the HHS Mandate. The universities won a victory at the district court in December 2013 from which the government now appeals.

East Texas Baptist University and Houston Baptist University hold their faith as central to their educational missions and so are challenging the government’s HHS Mandate, which forces them to violate their deeply held religious beliefs or pay outlandish IRS fines. Today their hearing took place at the United States Court of Appeals for the Fifth Circuit in Houston.

“The government has completely exempted most employers from the Mandate for economic or political reasons,” said Diana Verm, Legal Counsel for Becket. “But it refuses to exempt religious ministries like East Texas Baptist and Houston Baptist. The government is using East Texas Baptist and Houston Baptist’s health plans to deliver drugs and devices they object to. That’s a violation of their religious liberty and the law.”

East Texas Baptist and Houston Baptist are committed to Christian principles, including respect for the sanctity of human life. That is why in 2012, the two Baptist colleges first joined Becket in challenging the HHS Mandate, which is forcing them to violate the very teachings that guide their ministries.

“Baptists were some of the first religious believers to make use of religious liberty laws in this nation. The government still hasn’t learned that it can’t coerce groups like East Texas Baptist and Houston Baptist to violate their faith.” said Verm.

Becket has led the charge against the unconstitutional HHS mandate, winning a landmark victory at the U.S. Supreme Court in  Burwell v. Hobby Lobby. It currently represents the Little Sisters of the Poor, Mother Angelica’s Eternal Word Television Network, and Colorado Christian University, along with many other religious ministries.

For more information or to arrange an interview with a Becket attorney, please contact Melinda Skea at media@becketlaw.org or 202.349.7226.