Since its founding in 1994, Becket’s record shows it is the only law firm that defends religious liberty for all faiths. 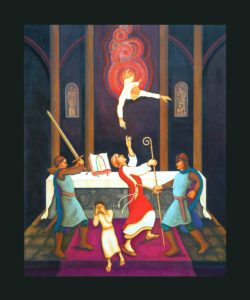 In just over 25 years, Becket has become the premier religious liberty law firm and the only non–profit, public–interest legal and educational institute that protects the free expression of all religious traditions.

In 1994, founder Kevin “Seamus” Hasson left a top D.C. law firm and opened Becket in Washington, D.C.  Since then, Becket has grown into a vibrant law firm that has national and international reach.  Though certainly not the largest, it is widely regarded–across political and religious lines–as the best religious liberty law firm in the United States.  Since its founding, Becket has maintained an average 85% win rate in its cases.

Becket’s principal work has always been First Amendment litigation, not only on behalf of people of faith against the government, but also in defense of the government when it is sued for being religion-friendly.  The firm files most of its lawsuits in federal court, but beginning in 2004, it started filing suits before international tribunals under international law.  Most of its academic work is accomplished under the umbrella of the Becket Institute, which was founded at St. Hugh’s College of Oxford University in 1997.

Becket is named after Thomas à Becket (1118-70 AD), who stood resolutely at the intersection of church and state. As a friend of King Henry II, Becket served as Chancellor of England and oversaw the laws of the kingdom. But as Archbishop of Canterbury, he steadfastly refused to allow the King to interfere in the affairs of the Church and was martyred by the King’s knights for defending the principles of religious liberty. His courage is commemorated in the artwork above, painted in honor of Becket’s 10th anniversary. Thomas à Becket is venerated as a saint and martyr in the Roman Catholic Church and in the Anglican Church.

“St. Thomas looks not at impending death nor at the darkness in those who inflict it on him, but upward. His body has received a preliminary sword thrust into his side, and the wound has begun to bleed as the blade is withdrawn. Symbolized in this is a faithful bishop’s conformity to the crucified Christ. Yet this is not the killing blow, which will be to his head. In the deluded minds of the knights, their acts may appear to be no more than a defense of the English kingdom, yet they strike at the very nature of Christ’s eternal Kingdom. After Becket’s death, Henry II’s reign became increasingly destabilized, notably during the revolt against him by his sons, and his unpopularity among the English people grew to be near universal. At the same time the Church in England flowered. In striving to amass power for the throne, the king had lost it. In losing his life, St. Thomas had gained it. These lessons remain unchanging to our own day.”  -Michael D. O’Brien (artist)