In 2011, Abdul Muhammad, an inmate in an Arkansas state prison, sued in federal court for the right to wear a beard in accordance with his Muslim beliefs. After he lost in federal court, Becket and Professor Douglas Laycock of University of Virginia Law School stepped in to represent him at the U.S. Supreme Court. In January 2015, the U.S. Supreme Court ruled 9-0 in Mr. Muhammad’s favor, agreeing with Becket that denying his request to grow a religious beard violated the Religious Land Use and Institutionalized Persons Act (RLUIPA), a Congressional act passed with bipartisan support in 2000.

On January 20, 2015, the U.S. Supreme Court ruled 9-0 in favor of Mr. Muhammad, an Arkansas prison inmate. In June 2015, the State of Arkansas agreed to a permanent injunction that allows prisoners, like Mr. Muhammad, to grow religious beards. 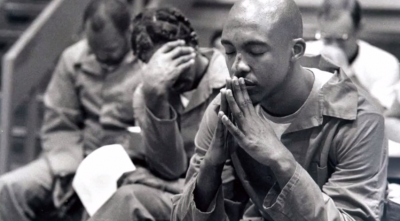 Protecting religious expression for prisoners is important, see why:

Nearly two decades ago, Congress found that government bureaucrats routinely trample on religious liberty in prison. As the joint statement of Senators Hatch (R-UT) and Kennedy (D-MA) put it: “Whether from indifference, ignorance, bigotry, or lack of resources, some institutions restrict religious liberty in egregious and unnecessary ways.”

These religious liberty restrictions affected people of many faiths. Many prisons barred Jewish inmates from wearing yarmulkes, denied Catholics access to the sacraments of communion and confession, and shut down Evangelical Bible studies. Many prisons also banned religious diets such as kosher food, confiscated and destroyed sacred texts, such as the Bible, the Koran, the Bhagavad Gita, and often banned religious objects, such as rosaries, prayer shawls, and yarmulkes. One prison prohibited various religious holidays, restricting prisoners’ ability to fast, pray, and worship God on special occasions. And in one extreme instance, prison officials violated the seal of the confessional by bugging inmates’ confessions to their priests.

In response to these and many other displays of religious suppression, an overwhelmingly bipartisan Congress enacted a landmark civil rights statute, which was signed by President Clinton in 2000: the Religious Land Use and Institutionalized Persons Act (RLUIPA).

RLUIPA embodies a very simple principle: Prison officials should not impose egregious and unnecessary restrictions on religious liberty. Of course, prisoners lose many of their physical rights when they enter prison, but they cannot be forced to surrender peaceful expressions of their humanity due to the arbitrary whims of prison officials. Just as the Constitution prevents dehumanizing forms of cruel and unusual punishment, RLUIPA prevents stubborn bureaucrats from stripping inmates of human dignity by denying them the ability to seek God.

Despite the promise of RLUIPA, some inmates still experience persecution for peaceful displays of religious devotion. In June 2011, Abdul Muhammad, an inmate in an Arkansas state prison, sued in federal court for the right to wear a beard in accordance with religious beliefs. The Arkansas prison had denied Mr. Muhammad’s request to grow the ½ inch beard his Muslim faith commands, citing security and safety concerns, even though Arkansas already allowed inmates to grow beards for medical reasons, and even though Mr. Muhammad’s ½ inch beard would be permissible in 44 state and federal prison systems across the country.

Representing himself, Mr. Muhammad lost in federal trial court and in the Eighth Circuit Court of Appeals in St. Louis. He then submitted a handwritten petition for an injunction to the Supreme Court. On March 3, 2014, the Supreme Court granted his petition and said that it would hear his appeal in full.

Unanimous victory at the Supreme Court

Becket and Professor Douglas Laycock of the University of Virginia School of Law stepped in to represent Mr. Muhammad at the Supreme Court. On January 2015, the Supreme Court ruled unanimously in favor of Mr. Muhammad, saying Arkansas had clearly put Mr. Muhammad in an impossible choice: to violate his beliefs or suffering disciplinary sanctions. The Court rejected Arkansas’s defenses, pointing out that because so many other states were able to accommodate inmates required to grow a beard for both medical and religious reasons, Arkansas had to explain why its situation was different.

For the in-depth story, listen to the Stream of Conscience podcast episode about this case, Conviction and Confinement.