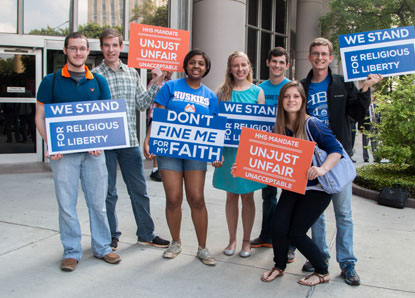 Washington, D.C. – Becket will represent East Texas Baptist University and Houston Baptist University in oral argument at the United States Court of Appeals for the Fifth Circuit in Houston on April 7th. Both liberal arts colleges hold their faith as central to their educational missions and so are challenging the government’s HHS Mandate, which forces them to violate their deeply held religious beliefs or pay outlandish IRS fines. The universities already won a victory at the district court in December 2013, and tomorrow, the Fifth Circuit will hear the government’s appeal of that decision.