Link: May 2015 The Hill: Protecting the Right to Serve God and Country by Daniel Blomberg

Link: April 2014 letter to Acting Under Secretary of Defense for Personnel and Readiness calling for repeal of ban

Link: March 2014 Letter from 100 Members of Congress calling for Army to modernize uniform code to allow Sikhs to serve 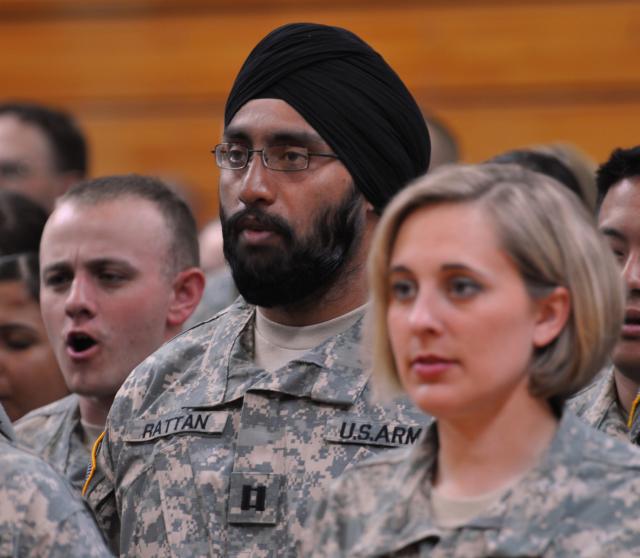 Washington, D.C. – A federal court ordered the Army to allow a Sikh college student to join his college’s NROTC unit without having to shave his beard, cut his hair or remove his turban. The detailed and colorful 49-page opinion states that “given the tens of thousands of exceptions the Army has already made to its grooming and uniform policies …. the Army’s refusal to permit him to do so while adhering to his faith cannot survive” the protections in the federal Religious Freedom Restoration Act.

The court also reminded the Army of the exemptions it had granted, including grandfathering 197,102 soldiers who had non-conforming tattoos as well as issuing 183 exceptions to the current tattoo policy including “a vampire Mickey Mouse” tattoo.

According to court documents, the student, Iknoor Singh, a junior at Hofstra University, “hopes to serve in Military Intelligence, and he speaks Urdu, Hindi, and Punjabi, as well as English.”

“All this Sikh student wants to do is to serve his country,” said Eric Baxter, Senior Counsel at Becket. “The military cannot issue uniform exemptions for secular reasons but then refuse to issue them for religious reasons. The Religious Freedom Restoration Act was written and passed nearly unanimously by Congress precisely to protect the rights of individuals such as Mr. Singh.”

The opinion, issued last Friday, June 12, relied heavily on the standard for religious protection set out in Supreme Court cases such as Holt v. Hobbs and Hobby Lobby. Both cases were brought to the Supreme Court by Becket.

“When the government singles out religious people and refuses to protect their rights, our democracy is impoverished,” added Baxter. “The court’s opinion is not only good for Sikhs, it is good for our country.”

“This decision should allow religious Jews to serve their country while adhering to Torah law,” said Rabbi Sanford Dresin, Director of Military Programs for the Aleph Institute.

Sikhs such as Major Kamaljeet Singh Kalsi, an Army Doctor who served in Afghanistan, earning a Bronze Star, have been advocating for their ability to serve in the military. In a Congressional policy hearing in early 2014, Major Kalsi stated:  “I love the Army, I love the military. It’s become a big part of me. Sikhs everywhere are very patriotic. We just want to serve our nation…We just want to serve, to become part of the community, without having to give up what is our religious uniform.”

For centuries, the bravery and skill of Sikhs has been praised by many leaders. Among the most well known references to their courage is Winston Churchill’s: “British people are highly indebted and obliged to Sikhs for a long time. I know that within this century we needed their help twice [in two world wars] and they did help us very well. As a result of their timely help, we are today able to live with honour, dignity, and independence. In the war, they fought and died for us, wearing the turbans.

Becket attorneys are available to comment on the decision.