Arizona town urged to stop discriminating against houses of worship Arizona town’s ordinance allows signs for politicians, but not for churches, mosques or synagogues 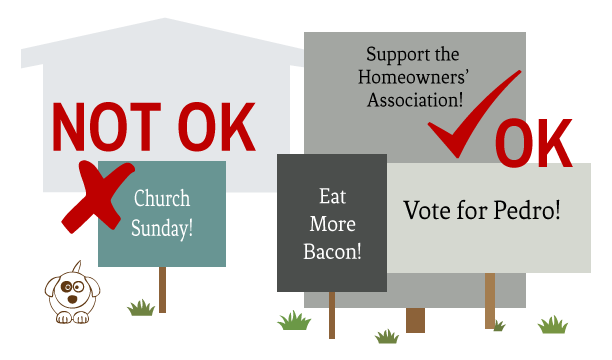 Good News Community Church is typical of many new churches. These churches are small and have no permanent location, but they are still committed to helping people come together and live out their faith. Financially speaking, they do not have much, so displaying street signs is one of the best ways they can share their message.But in 2005, the Town of Gilbert imposed content-based regulations that severely restrict speech for all houses of worship, including Good News Church. Under the town’s ordinance, signs placed by houses of worship must be 60% smaller than ideological signs (20 sq. ft.) and about 81% smaller than political signs (32 sq. ft).  Houses of worships’ signs can be displayed for only fourteen hours, while political signs can stand for months, and ideological signs indefinitely.

“Is anyone surprised that politicians gave themselves a special deal?,” added Rassbach. “Thank goodness the Constitution says that ‘Vote for Me!’ is not a more important message than ‘Come pray with us.’” Becket for Religious Liberty’s amicus brief argues that the Town of Gilbert’s ordinance arbitrarily discriminates against Good News and every other house of worship. The plaintiffs are represented by the Alliance Defending Freedom.

Becket is a non-profit, public-interest law firm dedicated to protecting the free expression of all religious traditions. For over 20 years, it has defended clients of all faiths, including Buddhists, Christians, Jews, Hindus, Muslims, Native Americans, Sikhs, and Zoroastrians. Its recent cases include two major Supreme Court victories: the landmark ruling in Burwell v. Hobby Lobby, and the 9-0 ruling in Hosanna-Tabor v. EEOC, which The Wall Street Journal called one of “the most important religious liberty cases in a half century.”For more information, or to arrange an interview with one of the attorneys handling this case, please contact Melinda Skea, media@becketlaw.org, 202.349.7224.