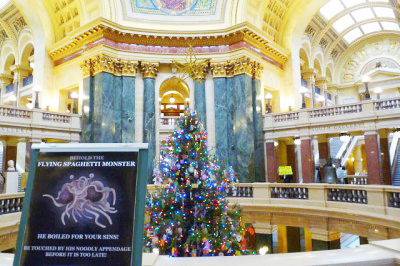 Washington, D.C. – Becket is pleased (well, sort of) to announce the recipient of our lowest honor, the 2013 Ebenezer Award, which is given annually to the most ridiculous affront to Christmas or Hanukkah celebrations.

This year the award goes to Wisconsin’s Department of Administration, which apparently doesn’t know that it is constitutionally permissible for the government to have a tasteful holiday display celebrating various aspects of the Christmas season. So instead, the Department of Administration invited anyone and everyone to display anything they want.

The result? Wisconsin citizens are now being greeted by a display of the “Flying Spaghetti Monster” in their State Capitol. The sign depicts a dripping wet clump of boiled spaghetti with two strategically placed meatballs, and this message:  “He boiled for your sins. Be touched by his noodly appendage before it is too late.” The creators of the display say it is a protest against any government recognition of the religious roots of the Christmas season.

Now, don’t get us wrong. We’re all for free speech. We think everyone should be allowed to speak their mind when the government opens up a forum for speech.

The problem here is that government bureaucrats have forgotten that there is a difference between government speech and private speech. The government is allowed to speak in its own voice and communicate its own message. When it recognizes important aspects of human history or culture, it is not required to include every possible competing message. The postal service can issue a stamp honoring Martin Luther King Jr. without also honoring the Ku Klux Klan. Congress can celebrate Veterans’ Day without also celebrating Pacifists’ Day. And Wisconsin can recognize Christmas and Hanukkah without also recognizing the Flying Spaghetti Monster.

Earlier this year, an important decision from the Sixth Circuit addressed precisely this issue. The City of Warren, Michigan, put up a holiday display including a nativity scene, and it refused to include a sign from the Freedom From Religion Foundation saying “Religion is but Myth and superstition That hardens hearts And enslaves minds.” Not surprisingly, the Sixth Circuit sided with the city. As the court explained, the Constitution “does not convert [holiday] displays into a seasonal public forum, requiring governments to add all comers to the mix and creating a poison pill for even the most secular displays in the process.” Read the Sixth Circuit opinion here.

So this season, we urge government bureaucrats everywhere to grow a spine—and use your voice. The government can recognize the historical, cultural, and religious significance of 2000-year-old events that altered the course of human history, without giving equal time to dripping wads of spaghetti and griping atheists. The Constitution allows it. Common sense requires it.

Rhode Island Governor Lincoln Chaffee deserves this year’s Eggnog Toast, when, after realizing the error of his ways, he used the words “Christmas tree” instead of “holiday tree” in the invitation for this year’s State Capitol’s tree lighting ceremony.  He was the recipient of the 2012 Ebenezer award for treating the lighting of the Christmas tree as a state secret. His fear of a flash mob singing a “religious” song such as “O Christmas Tree” led him to disclose the lighting of the festive tree only moments before it happened. Cheers to the Governor for recognizing that the tree is, indeed, a Christmas tree. Now that wasn’t so hard was it?

And if this hasn’t been enough to make you say “bah humbug,” here are some notable previous Ebenezer recipients:

Becket  is a non-profit, public-interest law firm dedicated to protecting the free expression of all religious traditions. For over 20 years, it has  defended clients of all faiths, including: Buddhists, Christians, Jews, Hindus, Muslims, Native Americans, Sikhs, and Zoroastrians. Its recent cases include two major Supreme Court victories: the landmark ruling in  Burwell v. Hobby Lobby, and the 9-0 ruling in  Hosanna-Tabor v. EEOC, which The Wall Street Journal called one of “the most important religious liberty cases in a half century.”

For more information, or to arrange an interview with one of the attorneys, please contact Melinda Skea, Communications Director, at  media@becketlaw.org  or call 202.349.7224.