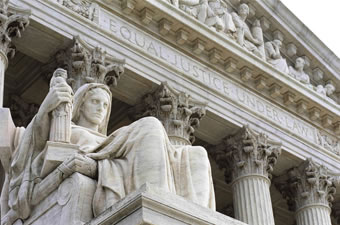 The unanimous decision adopted Becket’s arguments, saying that religious groups should be free from government interference when they choose their leaders. The church, Hosanna-Tabor, was represented by Becket and Professor Douglas Laycock, University of Virginia Law School. For years, churches have relied on a “ministerial exception” which protects them from employment discrimination lawsuits by their ministers.

“The message of today’s opinion is clear: The government can’t tell a church who should be teaching its religious message,” said Luke Goodrich, Deputy National Litigation Director at Becket. “This is a huge victory for religious freedom and a rebuke to the government, which was trying to regulate how churches select their ministers.”

The Court rejected the government’s extremely narrow understanding of the constitutional protection for religious liberty, stating: “We cannot accept the remarkable view that the Religion Clauses have nothing to say about a religious organization’s freedom to select its own ministers.”

“This is a huge win for religious liberty,” said Professor Doug Laycock.  “The Court has unanimously confirmed the right of churches to select their own ministers and religious leaders.”

“It is amazing when a church from Redford, Michigan stands up for its rights and ends up going all the way to the Supreme Court,” said Reverend Paul Undlin of Hosanna-Tabor. “Praise God for giving the Justices the wisdom to uphold the religious freedom enshrined in our Constitution!”

“For six years I fought the government, sacrificing my practice and livelihood because I believed the government had no right to choose teachers for our small school,” says Deano Ware, local attorney for the church. “In the end, we showed up at the steps of the Supreme Court with our sling and stone, in the company of Becket and the greater community of faith, fought the government and won. This is a great day for all Americans of every of faith and all freedom-loving citizens.”

Becket is a non-profit, public-interest law firm dedicated to protecting the free expression of all religious traditions. Becket has a 17-year history of defending religious liberty for people of all faiths. Its attorneys are recognized as experts in the field of church-state law.