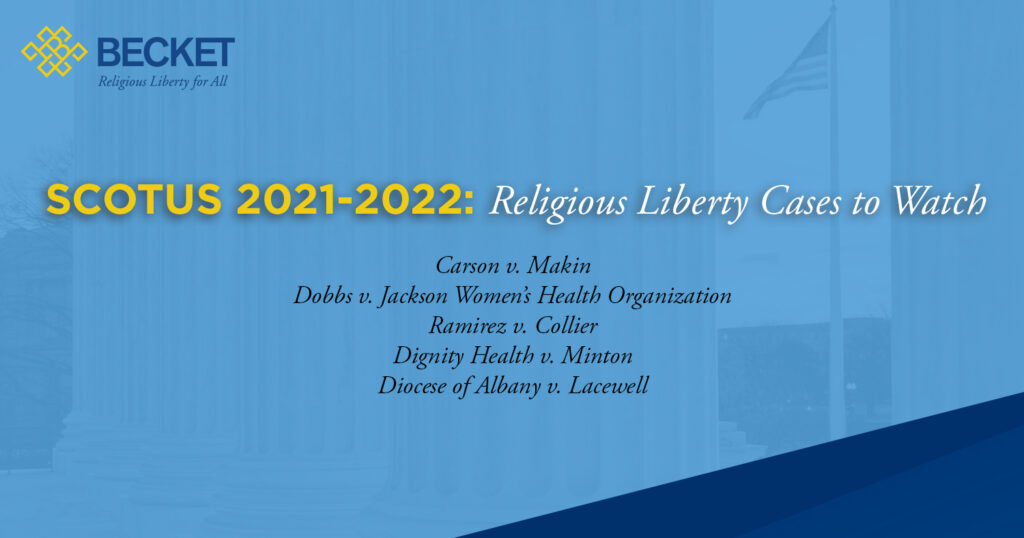 WASHINGTON – Last year, in a range of cases concerning COVID-19, college campuses, the federal no-fly list, and foster care, the Supreme Court repeatedly strengthened religious liberty. In the upcoming 2021 Term, which opens October 4, the Supreme Court will have the opportunity to protect rural families and their children’s access to religious private school education, prisoner’s comfort of clergy in the death chamber and goat-herding nuns from mandated abortion coverage in their insurance plan.

In Carson v. Makin, the State of Maine has a religious discrimination problem. It provides funding to students in rural parts of the state who want to attend a secular elite prep school in another part of New England—or even overseas—but it won’t do the same for those who want to attend religious private schools down the street. Becket’s brief argues that this type of religious discrimination is unconstitutional because states can’t punish families and children for choosing religious schools. The Supreme Court agreed to hear the case in July of 2021 and oral argument is expected in late 2021 or early 2022.

In Ramirez v. Collier, a condemned man is asking for his pastor to pray for him in the death chamber. The State of Texas has refused to allow John Ramirez’s pastor to pray aloud for Ramirez, or hold Ramirez’s hand in prayer, in the death chamber. As one of the oldest religious exercises in human history, allowing clergy to assist the condemned at the moment of death is at the heart of religious liberty. Becket filed a friend-of-the-court brief in support of Ramirez’s emergency application at the Supreme Court last week. That application was granted and the case was scheduled for argument before the Court on November 1, 2021.

In Diocese of Albany v. Emami, nuns are back at the Supreme Court. This time, an order of nuns that provides healthcare services is among a coalition of religious groups fighting a New York state abortion mandate that would force them to cover abortion in their health plans. The mandate does have a narrow religious exemption—except Jesus himself wouldn’t qualify because Jesus served people of all faiths. That’s a problem for the Carmelite Sisters, because they perform social work for people of all faiths. Becket and the law firm Jones Day have filed a petition to the Supreme Court, and a decision to take the case could come as early as October 8.

Join the Nation’s religious freedom experts to discuss these and other religious liberty cases to watch this coming term. On the call we will discuss the themes for the upcoming term, cases being heard this term and preview petitions currently pending before the Court. We will take questions at the end of the call.

This press call has already concluded. Click here listen to a recording.

Additionally, Becket has just launched season 2 of its Stream of Conscience podcast with the release of episode one: A Love Letter to RFRA. It can be found on Apple Podcasts, Google Podcasts, Spotify and wherever else you stream!