Link: Photos and videos for media use 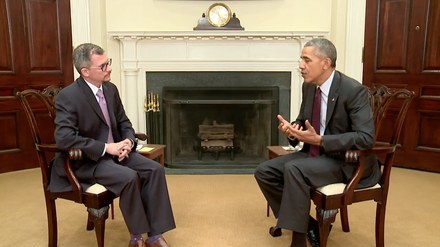 WASHINGTON, D.C. – Following the Supreme Court’s unanimous decision yesterday to overturn the lower court ruling against the Little Sisters and forbid the government from fining the Little Sisters for failure to comply with its “contraception mandate,” President Obama applauded the decision as a win for religious freedom and women. In an interview following the decision, President Obama said it was a win for everyone and that women could continue to obtain contraception while the religious plans are protected by the Court from being forced to comply with the HHS mandate.

The government had previously told the Supreme Court that any woman who does not receive contraceptive coverage from her employer can already get free contraceptive coverage from many other sources because those “employees will ordinarily obtain coverage through a family member’s employer, through an individual insurance policy purchased on an Exchange or directly from an insurer, or through Medicaid or another government program.” Following the Court’s decision, President Obama said, “The practical effect right now is that women will still continue to be able to get contraception, if they are getting health insurance. And we are properly accommodating religious institutions who have objections to contraception.”

“I wish HHS had reached the same conclusion five years ago that President Obama did yesterday,” said Mark Rienzi, senior counsel at Becket. “But the President’s acknowledgment that any woman who wants free contraception can already get it right now—while the Little Sisters are under Court protection against a forced takeover of their health plan— should effectively end this debate over whether the HHS mandate was necessary to providing women access to these services.”

“The rhetoric from our opponents in this case has never matched the reality,” said Rienzi.  “We hope that the President’s willingness to acknowledge that the Little Sisters’ religious objections have never threatened any woman’s access to contraception will encourage others to tone down their rhetoric and follow his lead.”

The government exempts 1 in 3 Americans from the HHS mandate. It also exempts large corporations such as Exxon, Visa and even the government’s own military family plan. A total of 100 million Americans are exempt from this regulation and could be eligible for coverage under the new solution chosen by the government.

The Little Sisters are joined in their case by many other Becket clients, including Christian Brothers Services, Christian Brothers Employee Benefit Trust, Houston Baptist and East Texas Baptist Universities, Reaching Souls International, Truett-McConnell College, and GuideStone Financial Services of the Southern Baptist Convention. Other parties in this case include Geneva College, Southern Nazarene University, the Roman Catholic Archbishop of Washington, and the Most Reverend David A. Zubik. All of these clients also had the adverse decisions in their cases vacated and sent back to the lower courts.

Paul D. Clement of Bancroft, PLLC presented the oral argument before the U.S. Supreme Court. Noel J. Francisco of Jones Day also presented arguments on behalf of several other ministries. The Little Sisters of the Poor are represented by Becket, Locke Lord LLP, and Professor Kevin Walsh of the University of Richmond Law School.

For more information about the case, visit www.thelittlesistersofthepoor.com.