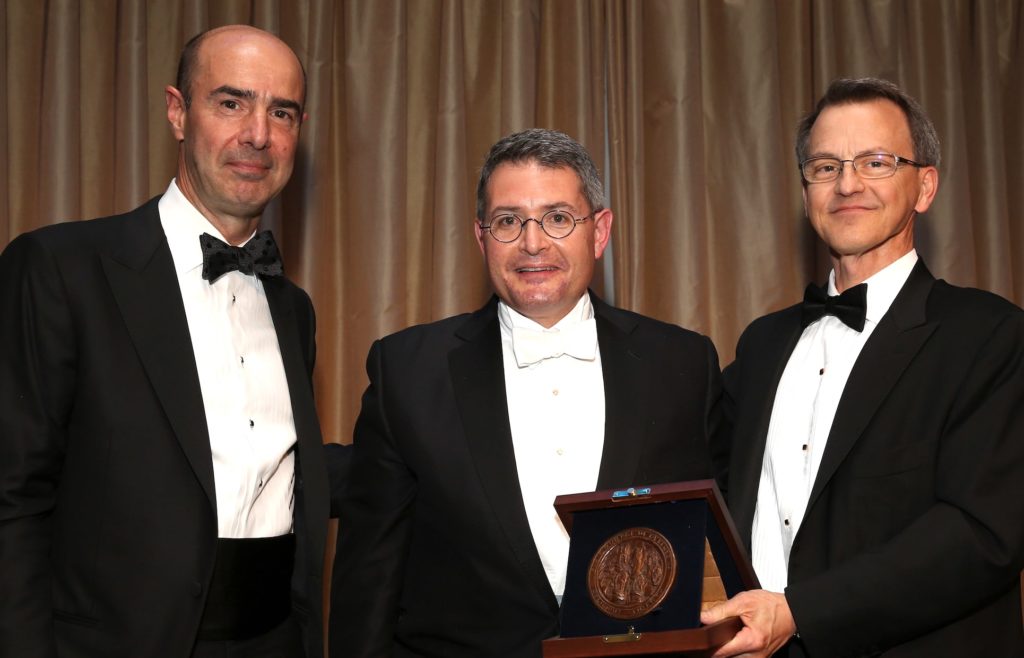 “Leonard has gone about what he’s done with saint-like qualities, modesty, serving in his own life as a quiet example of faith and courage. All of us here should feel gratitude for what Leonard has done,” said Eugene Scalia, son of the late Justice Antonin Scalia, partner of Gibson, Dunn & Crutcher LLP and presenter of the Canterbury Medal.

“Freedom of religion protects the right of conscience, not just in houses of worship but in workplaces, schools, hospitals, government offices, and anywhere else we go in this world,” said Leonard Leo, 2017 Canterbury Medalist. “Happily, we in the United States are still a world away from those other places where freedoms are rarely honored because of a fierce independence that refuses to be ordered about, pushed around, or told when your faith is welcome and when it’s not. This is the most American of qualities.” (Full transcript and video of his speech).

Leonard Leo is a champion of global religious liberty, having served as chairman of the U.S. Commission on International Religious Freedom (USCIRF) as well as delegate to the UN Council and UN Commission on Human Rights. In the U.S., he promotes civil liberties as executive vice president of the Federalist Society for Law and Public Policy Studies. Leo is also an active leader in Catholic organizations, serving on the boards of the Catholic Information Center, Catholic University of America, and the Ethics and Public Policy Center. He is a founding board member of the National Catholic Prayer Breakfast and a member of the Sovereign Military Order of Malta.

Law firm McDermott Will & Emery was also recognized at the Gala, receiving Becket’s Legal Service Award for their outstanding and crucial contributions on behalf of the Sikh community. For decades, observant Sikhs have been almost entirely excluded from U.S. military service because of regulations that prohibited them from maintaining their religiously mandated dress and grooming. McDermott Will & Emery’s partnership with Becket, along with the Sikh Coalition, culminated in new regulations that now allow observant Sikhs to serve their country without forfeiting their faith.

The 2017 Canterbury Medal Gala included an exclusive, one-night-only photography exhibit entitled Religion in America. The stunning exhibit allowed viewers to experience the diverse religious landscape of America through intimate photographs depicting how different faiths worship in modern American society. The rituals of various faiths, including Buddhists, Christians, Hindus, Jews, Muslims, and Native Americans, were depicted in the 30+ photos of the event.