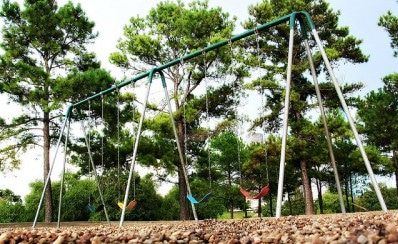 WASHINGTON, D.C. – The State of Missouri wants to make sure children play on safe playgrounds – unless they attend a religious school. Today Becket filed an amicus brief in the U.S. Supreme Court in support of Trinity Lutheran Church Learning Center, a Christian preschool that was barred from a state program providing grants to nonprofit organizations so they can replace hard playground surfaces with safer and softer recycled tires. The case will determine whether governments can ban religious organizations from participating in widely available safety programs simply because they are religious.

“A scraped knee is a scraped knee whether it happens at a Montessori school or a Lutheran school,” said Hannah Smith, senior counsel for Becket. “If the First Amendment means anything, it means that the government can’t discriminate against churches simply because they are religious.”

Trinity Lutheran’s playground, currently covered with a mix of gravel and grass, is used not only by its own schoolchildren but by many children from the surrounding community. When Trinity Lutheran applied to the state’s scrap tire program, its application ranked fifth out of 44 applications based on overall quality of the intended project, the number of people who would benefit from the improved playground, and the quality of the school’s recycling education programs. But, citing Missouri’s “Blaine Amendment,” the state denied the grant solely because the school is associated with a church.  Missouri’s Blaine Amendment was enacted in 1875 during a time of pervasive anti-Catholic bigotry and was originally designed to bar funding only to Catholic schools. But since then, it has been used to discriminate against people of all faiths in a variety of education and public welfare programs.

Becket filed its Supreme Court brief together with former Tenth Circuit Judge Michael McConnell, now a professor at Stanford Law School. Trinity Lutheran Church, represented by Alliance Defending Freedom, sued the State of Missouri in January 2013 for violating its First Amendment rights. In May 2015, the United States Court of Appeals for the Eighth Circuit ruled against Trinity Lutheran Church. The Supreme Court agreed to hear the case on January 15, 2016, and oral arguments will take place in the fall of 2016.