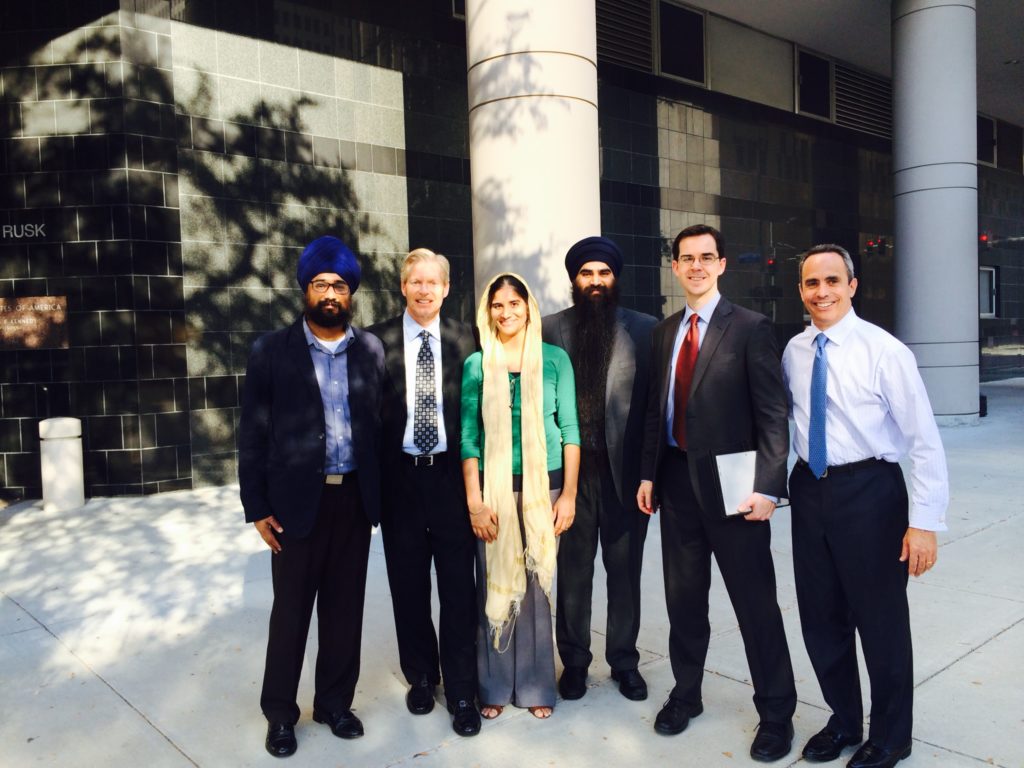 Washington, D.C. – Today the federal court of appeals for the Fifth Circuit ruled in a unanimous decision that the Department of Homeland Security had put a “substantial burden” on the religious exercise of a Sikh IRS accountant by prohibiting her from working at the Houston federal building due to her faith. The court of appeals reversed a Houston federal district court’s decision against Kawaljeet Tagore and remanded for further proceedings.

The case concerns Tagore’s religious practice of wearing a kirpan, a small Sikh article of faith similar in shape but not in sharpness or function to a knife. Baptized Sikhs are required to carry the kirpan at all times and it plays in some regards a role similar to a crucifix or tefillin. Tagore was banned from the federal building where her office was and eventually fired for refusing to take off this Sikh article of faith. The Fifth Circuit’s decision rejected the federal government’s justification of a generalized interest in protecting security and said that it must prove that it had a compelling interest in excluding Tagore specifically. The court also rejected the federal government’s attempt to question the validity of Tagore’s mainstream Sikh beliefs about refusing to take off her kirpan.

“This is a big win for religious freedom, and not just for Sikhs,” stated Eric Rassbach, deputy general counsel at Becket. “The Court made it crystal-clear that government does not get to second-guess citizens’ religious beliefs, and it also can’t just wave the “security” card around to justify bans on the core practices of any religion. Holding government to the proper legal standard is especially important for protecting Americans who practice minority faiths.”

Tagore has been represented during the litigation by Scott Newar, a prominent Houston civil rights attorney, along with Becket and civil rights organization the Sikh Coalition. During the litigation, the Federal Protective Service (FPS), a subagency of the Department of Homeland Security, revealed a new policy directive to accommodate all religious groups who do not want to give up their religious identity at the door of a federal building. The directive apparently was the direct result of Tagore’s lawsuit.

“Religious freedom is a precious thing, and government officials should treat it that way,” added Rassbach. “All too often callous bureaucrats trample religious liberty by imposing rules on religious practice that are not just intrusive and offensive, but also entirely unnecessary. That needs to stop, today.”