Aekash Singh, Jaskirat Singh, and Milaap Singh Chahal are Marine Corps recruits and devout members of the Sikh faith. After being recruited for service in the Marines, all three were told they had to choose between their religious obligation to maintain a beard and a turban, or their faith’s call to defend the defenseless. Although the Marine Corps routinely accommodates soldiers who need to grow beards for other reasons, the recruits have been told they cannot enter basic training if they grow beards for religious reasons. Now the three recruits, joined by Sukhbir Toor, a Marine captain, are asking the Marines to ensure that all Sikhs who are called to serve can receive the religious accommodations that fairness—and federal law—demand. No one should be forced to abandon their religious beliefs to serve our country.

On December 23, 2022, the U.S. Court of Appeals for the District of Columbia ruled that Sikhs cannot be barred from Marine Corps recruit training because of their religious beards or other articles of faith, allowing Aekash Singh, Jaskirat Singh, and Milaap Singh Chahal to commence their military service. 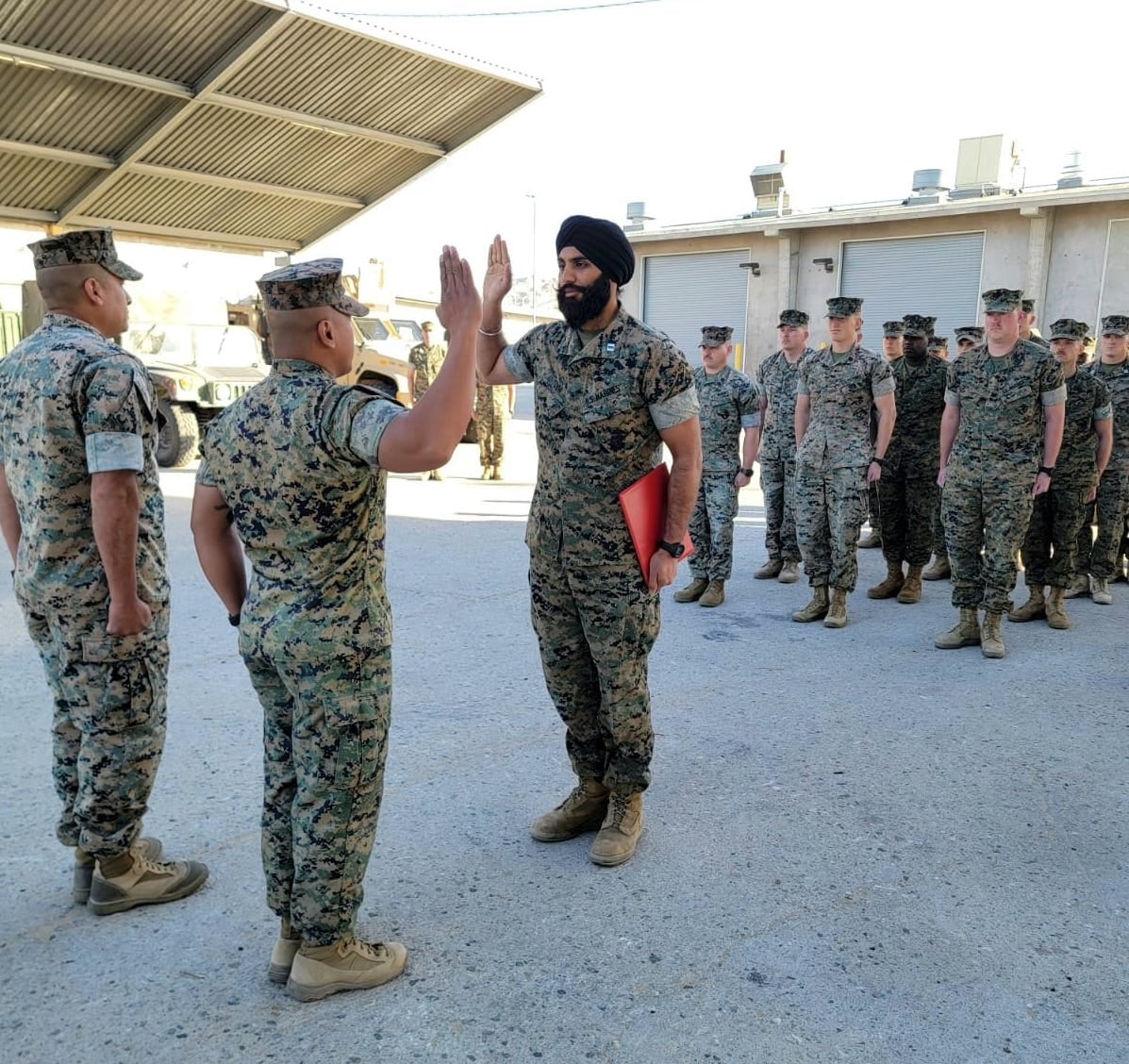 For centuries, Sikhs have lived according to the teachings of the gurus, which instruct them to shun evil and seek self-mastery, to regard God’s creation as sacred, and to always defend the weak and helpless. Many devout Sikhs live out their religious duty to defend the defenseless by serving with distinction in militaries around the world while maintaining their articles of faith, including unshorn hair. But Sikhs who seek to serve in the U.S. Marine Corps find themselves forced to choose between their religious obligations and their calling to do good.

Aekash Singh, Jaskirat Singh, and Milaap Singh Chahal faced a horrible dilemma when they sought to join the Marine Corps: shave and abandon their religious beliefs or go home. Even though the recruits passed all the medical and physical tests required to join, the Marine Corps argues that they must shave their beards to begin basic training because having a “uniform appearance” is necessary during recruit training. But other Marines are allowed to grow out their beards for medical reasons, and the Army, Air Force, and United States Military Academy permit religious beards during initial training.

The Marine Corps has been relaxing its uniformity standard for years specifically to promote greater diversity, allowing more diverse hairstyles, updating its dress code to better accommodate women, and even loosening longstanding bans on tattoos. In addition, the Marine Corps has recently granted Marines—including those in bootcamp—more leeway to grow a beard to combat “razor bumps,” a painful medical condition that inflames the face and neck after a close shave. And the U.S. Army and the U.S. Air Force have long been able to accommodate Sikh servicemembers—beards and all—without compromising mission readiness or safety.

Fortunately, the Constitution and the Religious Freedom Restoration Act (RFRA) ban the federal government from restricting religious freedom unnecessarily. This means that denying religious accommodations by asserting a need for uniformity while granting lots of other secular exceptions is not only unfair but unlawful as well. Sikhs shouldn’t have to choose between their faith’s teachings that encourage their military service, and their religious understanding of God’s requirements for their physical appearance. Their lawsuit simply asks the government to provide them with religious accommodations equal to those granted to Marines for secular reasons.

In August 2022, a D.C. district court ruled in Toor v. Berger that the three Marine recruits should not be protected with religious accommodations while the case is ongoing. Aekash Singh, Jaskirat Singh and Milaap Singh Chahal appealed the decision to the U.S. Court of Appeals for the District of Columbia, asking the court to allow them to enter basic training while keeping their articles of faith. On December 23, 2022, the D.C. Circuit Court ruled to protect the three Sikh recruits’ faith while their case continues. Judge Millett wrote for the court, saying that the Marines Corps has never explained “why the Corps cannot apply the same or similar [religious] accommodations that the Army, Navy, and Air Force, and Coast Guard provide.”