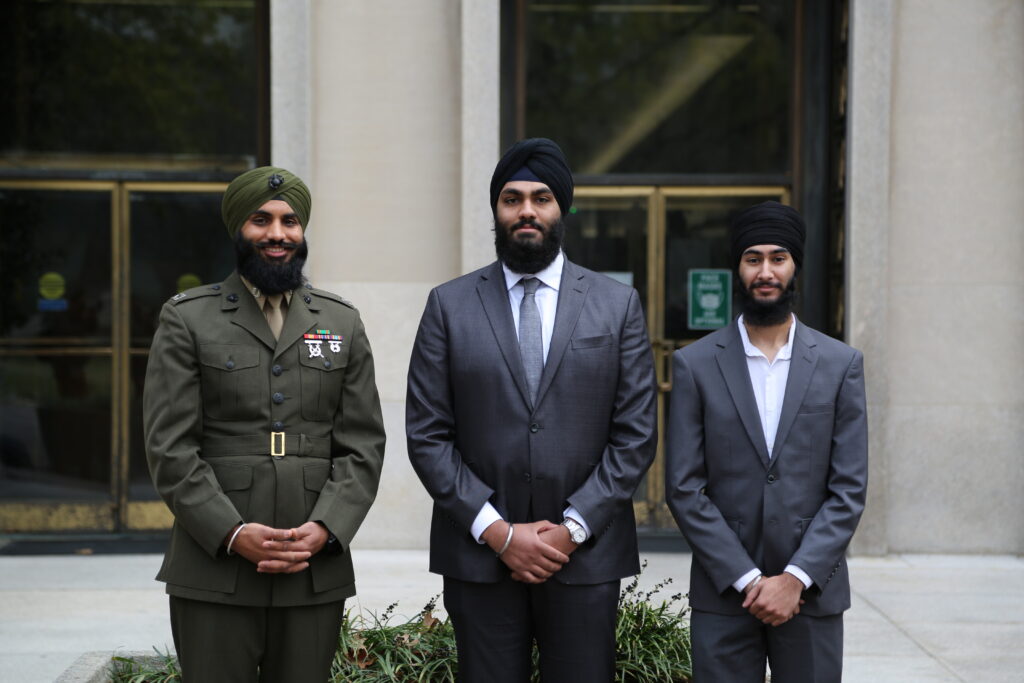 WASHINGTON – A federal court just protected the right of Sikhs to maintain religious beards and serve their country in the United States Marine Corps. Aekash Singh, Jaskirat Singh, and Milaap Singh Chahal were denied accommodations to enter basic training even though the Marines regularly allow beards for secular reasons.

In Singh v. Berger, the D.C. federal appeals court vindicated the recruits’ right to maintain a religious beard and wear a turban during basic training. The court wrote that the Marine Corps has never explained “why the Corps cannot apply the same or similar [religious] accommodations that the Army, Navy, and Air Force, and Coast Guard provide,” especially in light of “the exemptions already made for other Marine recruits’ beards, hair, and other individual physical indicia,” as well as the Corps’ “own history of flexible grooming and uniform requirements” since its creation in 1775. In light of all this, the Court found that the Sikh recruits “not only have a substantial likelihood of success on the merits—it is difficult to imagine them losing.”

The Marine Corps argued that allowing Sikhs to maintain religious beards would disrupt troop uniformity and appearance among recruits and ultimately threaten national security. However, the Marines already allow recruits to grow beards for medical reasons if they have psuedofolliculitis barbae (razor bumps) and have recently loosened restrictions on uniformity requirements by allowing tattoos and women to keep long hair. Other U.S. military branches—including the largest, the Army—have accommodated religious beards for years, as well as many respected militaries around the globe.

“Today’s ruling is a major victory for these Sikh recruits, who can now begin basic training without having to forfeit their religious beliefs,” said Eric Baxter, vice president and senior counsel at Becket. “It is also a victory for our nation, as three brave and dedicated men will soon serve our nation with valor in the Marine Corps.”

Sikhs have a long history of serving in militaries around the globe, motivated by their religious teachings that instruct them to defend the defenseless. Many Sikhs live out this duty by serving their countries while maintaining beards, turbans, and other articles of faith. But for years, the Marine Corps—unlike other branches of the military—barred Sikh recruits with religious beards from entry into basic training. Today, the federal circuit court struck that rule down as a violation of the Religious Freedom Restoration Act (RFRA).

“Sikhs have a storied history of capable service in the U.S. Army and Air Force as far back as World War I, doing so with beards, turbans, and other articles of faith,” said Giselle Klapper, senior staff attorney at the Sikh Coalition. “Today’s ruling means that faithful Sikhs who are called to serve our country can now also do so in the U.S. Marine Corps.”

Winston & Strawn, the Sikh Coalition, and Baker Hostetler are also representing the recruits.