Mass Communication Specialist 3rd Class Leo Katsareas is a devout Muslim serving in the United States Navy. His Islamic faith requires that he wear a beard, and his patriotism compels him to serve his country in the Navy. When he joined the Navy in 2016, Leo requested an accommodation to allow him to serve with a fist-length beard in compliance with his faith. Serving on board a ship, he was granted a “chit” — a waiver of permission — briefly allowing him to keep a beard, and at his last duty station he was given an accommodation for a very short, quarter-inch beard, equivalent to those permitted for medical needs. But at his most recent duty station, his request for a longer beard was again denied. Becket represented him in an internal Navy appeal for reconsideration. The Navy has now temporarily granted Leo’s request to maintain a four-inch beard, as his faith requires of him, while he is assigned to serve as a member of the Auxiliary Security Force. Becket has successfully defended members of the U.S. military seeking religious accommodations several times, including Sikh soldiers who wished to wear a beard and turban. We will continue pressing for Leo to be able to serve throughout his career with his religious beard in place. 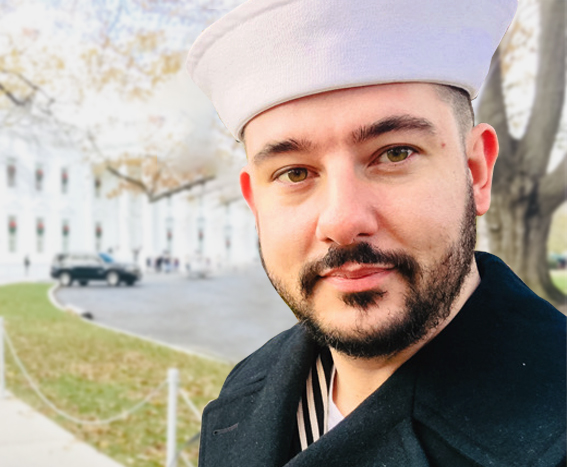 How does an Australian living in Qatar decide to enlist in the United States military?

When Leo Katsareas was a teenager in Australia, he found himself drawn to Islam as a path to Providence and a vehicle for protecting the inalienable rights of others and opposing all forms of oppression. At age sixteen, he converted and began living as a practicing Muslim. Later, as a young adult living abroad, Leo studied the American founding era, reading the texts of the Founding Fathers and the United States Constitution. He fell in love with America’s history, its principles, and particularly its commitment to freedom. He vowed to one day come to the United States and serve in the military.

Since then, Leo has done just that. After immigrating to the United States, he spent time working for the government, defending the American people and the freedom he loves by helping uncover and prevent significant terrorist threats both domestically and abroad. In 2016, he joined the United States military as he had promised, enlisting in the Navy. In his years of service, Leo has served on ships domestically and internationally becoming a Mass Communication Specialist in 2019. He works tirelessly for his adopted country while living out his Islamic faith.

A convert to Islam, Leo Katsareas believes that his faith requires him to wear a four-inch beard. This belief has led him to consistently seek accommodations from the Navy’s strict grooming policies. While on a ship in the Red Sea, MC3 Katsareas received a temporary “chit” — a note of permission — that allowed him to keep a beard. And at his last duty station, his commanding officers granted him a partial, quarter-inch accommodation, consistent with the exemptions given to those with medical needs. However, he was told that even this limited permission was not permanent, and he would need to reapply at any future stations of duty.

Grooming policies of the United States Military are designed to prevent safety threats and ensure that uniforms aren’t compromised. In the case of a fire on a ship, for example, Navy personnel might need to quickly don effective masks. MC3 Katsareas agrees that in a life or death situation, he may have to shave his beard and is willing to do so in the interests of his own safety and that of his fellow Sailors. However, he has been able to wear a mask with no issue, including during combat actions in 2016, where he was assigned to his ship’s firefighting party when it came under guided missile fire by Houthi insurgents in Yemen, as well as in other firefighting training situations. Additionally, in recent years the Army and Air Force have both updated their grooming policies in recent years to accommodate religious minorities. The Navy has failed to keep up.

Despite the absence of significant safety concerns that can’t be worked around, and despite broad religious accommodations granted by the other branches of the United States military, the Navy initially denied MC3 Katsareas’s recent request for a full accommodation that would allow him to grow a substantial beard in accordance with his Islamic faith. With Becket’s help, MC3 Katsareas launched an internal appeal of the Navy’s denial, seeking to defend the American freedom he fell in love with: the right to practice one’s religion in the public square, including while serving one’s country.

In April 2020, the Navy denied Leo’s seventh request for an accommodation for a fist-length beard. In May 2020, Leo appealed the denial, represented by Becket. On July 15, 2020, the Navy reconsidered and granted Leo a temporary, revocable accommodation, informing him that he can maintain his full religiously motivated beard and remain in good standing with the United States Navy while in his current duty assignment. In doing so, the Navy acted in accordance with the accommodation policies of other branches of the military and the Religious Freedom Restoration Act (RFRA).

Passed by a bipartisan Congress and signed by President Clinton in 1993 with the support of an extensive coalition of religious and civil rights leaders, RFRA prohibits the military from suppressing an individual’s sincere religious exercise without a compelling government reason.

Becket has successfully defended members of the U.S. military seeking religious accommodations a number of times. In 2015, Becket filed suit alongside the Sikh Coalition and the law firm McDermott Will & Emery on behalf of Captain Simratpal “Simmer” Singh, a committed Sikh and long-time captain in the U.S. Army, in Singh v. Carter, securing him temporary protections for his religious beard and turban. Becket filed a similar suit in 2016 in Singh v. McConville, representing three Sikh servicemen in the Army also seeking to serve without abandoning the marks of their faith. In response to the court ruling in Singh v. Carter and the suit in Singh v. McConville, the Army issued new regulations in 2017 stating that Sikh soldiers would not be forced to abandon articles of their faith throughout their military careers, thus making the victory for religious minorities serving their country a permanent one. Despite the Army’s new regulations, West Point did not automatically accommodate the religious beliefs of its cadets. In August 2017, Becket filed a lawsuit on behalf of two Sikh cadets slated to attend West Point. In court, West Point admitted that it did not have a compelling reason to deny Sikhs the ability to serve, and issued new guidelines that would allow Sikh cadets to maintain their articles of faith while serving at the Academy.

The Navy ought to follow the example of the Army and Air Force and America’s founding principles in recognizing and accommodating the religious belief of its service members and protecting the place of religion in the public square for all Americans. Service to country need not prevent service to God.

Individual freedom: An individual’s religious exercise encompasses more than just belief or worship — it involves visibly practicing the signs of one’s faith. Religious freedom protects the rights of individuals to observe their faith at all times — including while defending the freedom of all Americans by serving in the armed forces.

Public Square: Religion is natural to human beings and to human culture. Because of this, religious expression cannot be limited to the private sphere, but can, and should, have a place in the public square.

RFRA: The government — and, consequently, the military — cannot burden religious exercise of individuals or groups to violate their deeply held beliefs without compelling interest or when there are reasonable alternatives.