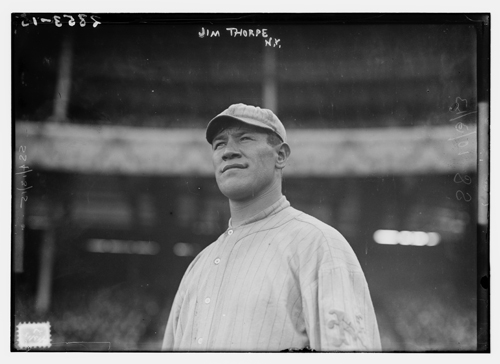 Arguably one of the greatest athletes of the 20th century, Jim Thorpe won two Olympic gold medals and played three different professional sports – football, track and field, and baseball. In the course of his career, he was inducted to ten Halls of Fame and in 1950 the Associated Press called him the “greatest American football player” and the “greatest overall male athlete.”

Jim Thorpe’s athletic prowess undoubtedly has something to do with the Sac and Fox Nation Indian blood that ran through his veins. Born with the Indian name Wa-Tho-Huk or “Bright Path,” Jim Thorpe carried the spirit and customs of his tribe until his death in 1953.

A violation of Native American customs

Thorpe’s remaining two sons, along with the Oklahoma-based Sac and Fox Nation, have been fighting since his death to return his remains to the family grave site on sacred Sac and Fox land in Stroud, Oklahoma. The struggle began after a family dispute cut short the burial ceremony.

Thorpe’s body was taken and auctioned off to the highest bidder—a small Pennsylvania town he’d never even visited. Jim Thorpe has been buried there ever since; not next to family, not on sacred Native American land, but commercially on display in Jim Thorpe, Pennsylvania, where his remains have been mocked, vandalized, and desecrated.

Now his sons—themselves now elderly—want to bring him home, burying him near his parents and other family members in Oklahoma. Conner & Winters, LLP and Stanford Law School Supreme Court Litigation Clinic represented them. But the town refused, envisioning major tourist attractions that would come from the deal – an Olympic stadium, football shrine, a Jim Thorpe themed sporting goods store, and even a hotel named “Jim Thorpe’s Teepees.”

The relocation of Thorpe’s remains to Pennsylvania violates the Sac and Fox Nation’s beliefs that a sacred burial ceremony must take place to allow a body’s spirit to successfully complete its spirit journey. It also violates the federal Native American Graves Protections and Repatriation Act (NAGPRA), which was specifically passed to defend Native American religious beliefs and help these communities reclaim sacred items and remains that were unjustifiably taken from them.

However, the Third Circuit Court of Appeals rejected the sons’ request, saying the protections in the statute would lead to “absurd outcome.” This is a dangerous precedent putting courts in the business of deciding what religious beliefs are valid and which are not.

In our country, courts should not be in the business of rejecting religious protections simply because they think protecting those beliefs is “absurd.” Given the history of mistreatment of Native Americans by government officials, they take special care to protect the Native Americans’ religious practices.

In July 2015 Becket led a diverse coalition of religious groups to the Supreme Court, filing a friend-of-the-court brief to help honor the religious beliefs and final wishes of Jim Thorpe and his remaining family. Members of the coalition included Becket, the Church of the Lukumi Babalu Aye, the International Society for Krishna Consciousness, the Muslim Public Affairs Council, the National Council of Churches, and the Queens Federation of Churches. The coalition was represented at the Supreme Court by Becket, along with attorneys Troy Eid and Harriet McConnell of prominent international law firm Greenberg Traurig LLP, which has a nationally-renowned Indian Law practice.

However, in October 2015 the Supreme Court denied to hear the case, thus ending the battle to bring Jim Thorpe’s body back to Oklahoma.