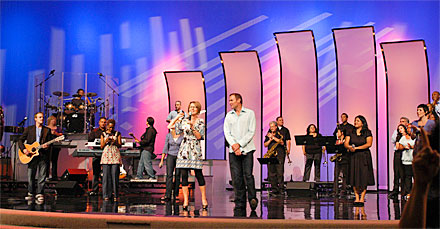 Cottonwood, a large non-denominational church in Orange County, California, was established in 1983 with a membership of just 50 people. Over the years, it grew rapidly, hosting 4,000 adults at worship services, and another 1,200 children at Sunday school each week. Its existing facility had a seating capacity of only 700, and it had to hold hold two services on Saturday and four on Sunday to accommodate its members. Yet it still had to turn away new worshipers because of limited space.

Church members began raising funds to purchase a 17.9 acre property for $13 million in a redevelopment area that had been vacant for decades. They drew up plans for a 300,000 square foot worship center with seating for more than 4,700, as well as a youth center, daycare, gymnasium, and other facilities to serve the congregation.

A city that chooses Costco over a church

In October 2000, Cottonwood filed an extensive application for a Conditional Use Permit (“CUP”), that went well beyond the city’s requirements. But a few weeks later, the city rejected it, citing omission of a Preliminary Design Review, despite the fact that the application itself states that such a review is optional. The following day on a Friday, the city sent the church a letter—by ordinary mail—informing them of a City Council meeting on Monday, at which it would adopt a moratorium on any new permit applications in the redevelopment area.

The moratorium lasted more than a year, during which the Council secured interest from Costco Corporation, the big warehouse retail store chain. The Redevelopment Agency then chose Costco’s proposal despite the fact that it doesn’t own the land, and that the property is not zoned for retail use.

In February 2002, represented by Becket and by the firm of Sheppard, Mullin, Richter & Hampton, Cottonwood Christian Center filed a lawsuit against the City of Cypress, charging violations of RLUIPA and the U.S. and California state Constitutions.

In April 2002, the Cypress City Council voted 3-0 to begin eminent domain proceedings to take the land and then sell it to Costco for construction of a new retail warehouse store. Later, after Council member Anna Percy compared the Council members to “parents” who have responsibility to make important decisions, and city residents and church members as “kids” who don’t have all the information to make such decisions, the Council voted 4-0 to take the property.

In June 2002, Cottonwood filed a motion for a preliminary injunction to stop the City of Cypress from taking its property. A judge granted the motion, and held that the church was likely to win, stating: “Preventing a church from building a worship site fundamentally inhibits its ability to practice its religion. Churches are central to the religious exercise of most religions. If Cottonwood could not build a church, it could not exist.”

After months of settlement negotiations, the city and the church dismissed the lawsuits after Cottonwood agreed to build its church on another 29 acre site in the same area.