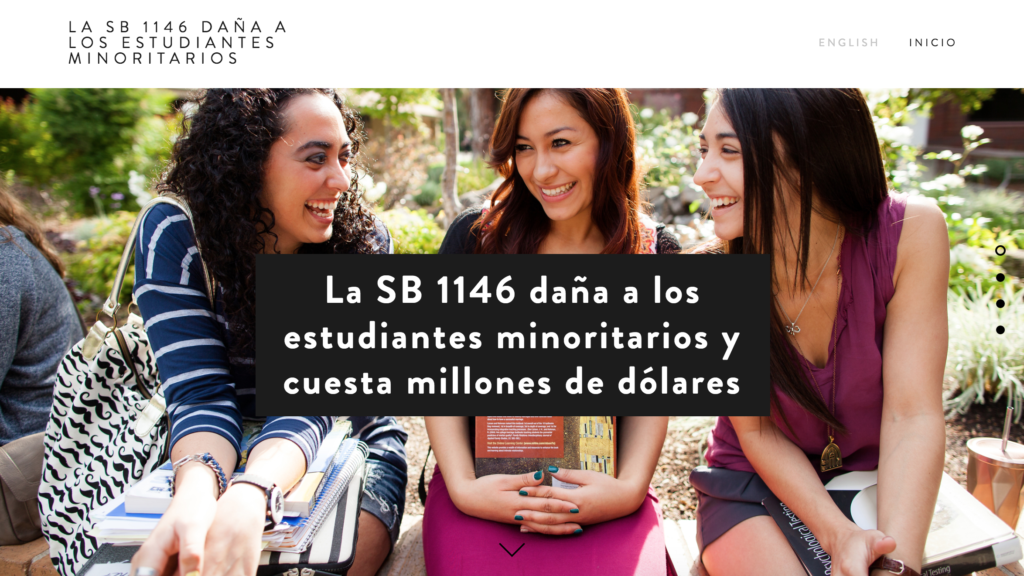 WASHINGTON, D.C. –  California politicians are considering a measure that cuts off crucial state aid for low-income minority students this time by discriminatorily cutting it for students, particularly Latinos and African Americans, who choose to attend private religious colleges. A  new website, available in Spanish and English explains how SB 1146 victimizes poor minority students, many of whom are the first in their families to attend college and would either have to drop out of college or be pushed into failing state schools with dismal graduation rates for minorities.

California’s legislature has recently repeatedly proposed cuts to the long-standing Cal Grant program. Cal Grants provide funding for low-income students, three out of four of whom are minorities. After failing in a bid to cut Cal Grants for all private colleges last year, the legislature is considering a new move to cut aid for students attending certain private religious colleges. But religious schools have high 4-year graduation rates,  roughly double the rate  of state schools. And because state schools come with high state subsidies, taxpayers could end up footing  hundreds of millions of dollars more in costs if students get forced out of the private religious schools of their choice and into state schools.

“SB 1146 represents politics at its worst,” says Montserrat Alvarado of Becket. “Whatever the political spin, the reality is that SB 1146 directly harms California’s most vulnerable students—many of whom are the first in their families to go to college—and will cost California taxpayers hundreds of millions.”

SB 1146 will most severely harm California’s African-American and Latino students. Such students disproportionately come from communities that are both deeply religious and financially disadvantaged. They enjoy very high rates of success at religious colleges like Fresno Pacific University, which graduates 60 percent of African-Americans and 70 percent of Latinos within 4 years. But by comparison, the California State University system—where most poor minorities would be funneled if SB 1146 passes—manages to graduate only about 9 percent of African Americans and Latinos in 4 years. Just last week, Archbishop José H. Gomez of the Roman Catholic Archdiocese of Los Angeles and Bishop Charles E. Blake of the Church of God in Christ issued a historic joint statement  condemning SB 1146 and “question[ing] why lawmakers would want to make it harder for Latinos and other minorities to receive an education[.]”

“SB 1146 discriminates against poor minorities,” says  Alvarado. “It lets politicians squeeze minorities for a few short-term dollars, and comes at the long-term cost of wrecked dreams and higher taxes.”

SB 1146 is  scheduled  to receive a vote in committee by Aug. 11, and could end up before the legislature for a vote by Aug. 19. If it passed, the governor would then have until the end of September to decide whether to veto it.