Religious non-profits tell Court: Yes there is a solution - Becket
Skip to Content

Religious non-profits tell Court: Yes there is a solution Supreme Court briefing agrees that government can provide contraceptives without nuns 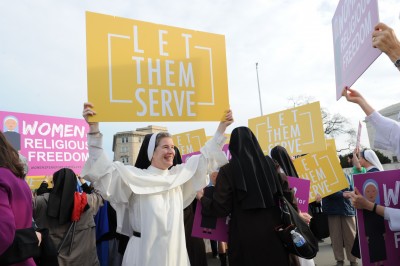 WASHINGTON, D.C. – Less than a week after the Supreme Court heard the case of the Little Sisters of the Poor (Zubik v. Burwell), the Court made an unprecedented move asking both sides to provide additional arguments about whether the government could find ways to distribute contraceptives without the involvement of religious non-profits and their health plans. The Court had also asked whether, for non-profits who buy traditional insurance plans, the government might hire the same insurance company to provide the drugs.

The religious non-profits told the Supreme Court: “The answer to that question is clear and simple: Yes.”

“These non-profits said “yes” to the Supreme Court, just as they have been saying “yes” to the federal government for many years.” said Mark Rienzi, senior counsel at Becket, which represents the Little Sisters of the Poor. “At some point, the government has to learn how to take yes for an answer. The religious objection has always been only to those methods of distribution that forced the non-profits and their plans to participate. The government should move on from this unnecessary fight, and go provide these services some other way that doesn’t use nuns.”

The government exempts 1 in 3 Americans from this regulation. It also exempts large corporations such as Exxon and Pepsi Bottling. A total of 100 million Americans are exempted, yet the Little Sisters of the Poor face millions in fines unless they violate their faith.

“We were encouraged by oral arguments and the Court’s request for supplemental briefs,” said  Sister Loraine Marie Maguire, Mother Provincial for the Little Sisters of the Poor. “We have always believed a solution is possible, and are hopeful the government will let us serve.”

The Little Sisters of the Poor are a 175-year-old order of religious women who care for the elderly poor. More information can be found about the case here: www.thelittlesistersofthepoor.com.

Religious college plaintiffs also weighed in. “This case is about the freedom of all Americans to follow their faith,” said Dr. Blair Blackburn, President of East Texas Baptist University. “At ETBU, we are proud to be part of the long tradition of Baptists in America, just as Roger Williams advocated for religious freedom and separation of church and state in Colonial America and founded Rhode Island and the First Baptist Church in America. We simply ask the Court to recognize that ETBU is a conscientious objector, and that the federal government is insisting that we act as a conscientious collaborator.”

“At HBU, our faith animates everything we do, including our emphasis on academic excellence,” said Dr. Robert Sloan, President of Houston Baptist University. “We are hopeful that the Supreme Court will let us continue to serve our students and others.”