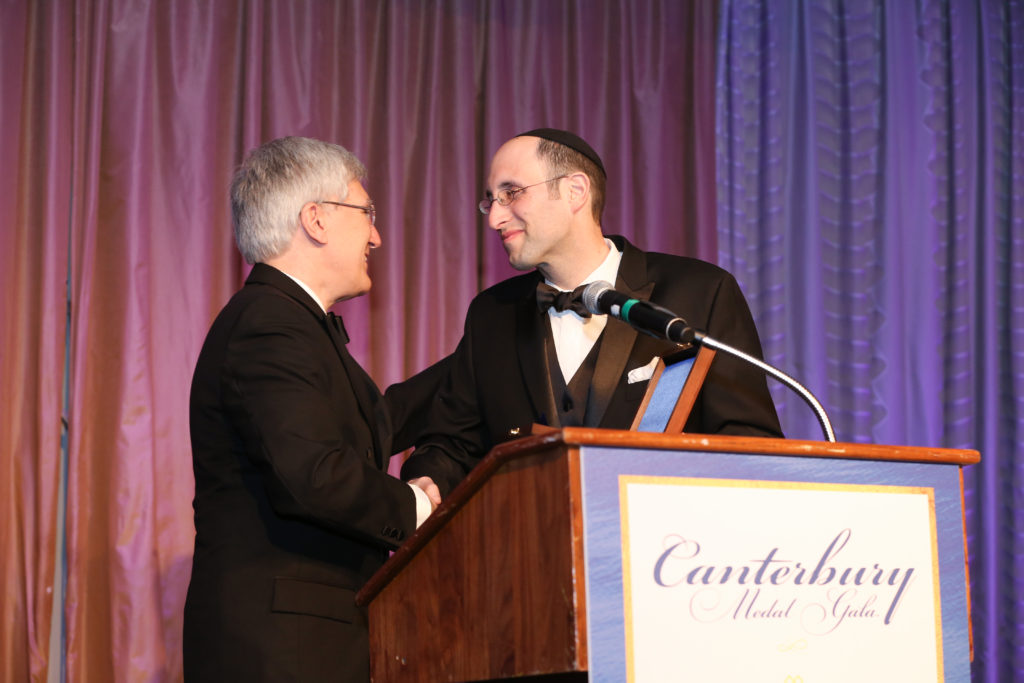 “Today in America people of faith inspire each other, sustain each other, so that an alliance over religious freedom can form – without diminishing our religious differences – a fellowship,” said Rabbi Dr. Meir Soloveichik, the 2018 Canterbury Medalist.  (Speech Transcript and Video)

A descendant of a long line of renowned Orthodox rabbis, Rabbi Dr. Meir Soloveichik is the spiritual leader of Shearith Israel, the oldest Jewish congregation in the United States, founded in 1654. An advocate for the Jewish faith and religious freedom, Rabbi Soloveichik works tirelessly alongside religious leaders of diverse faiths to strengthen interfaith relations in America. He also holds a Ph.D. in religion from Princeton, serves as director of the Zahava and Moshael Straus Center for Torah and Western Thought at Yeshiva University, lectures in a wide range of public forums, and has been published extensively including in The Wall Street Journal, The Forward, and the New York Times.

This year’s Legal Service Award winner, Baker Botts, has donated hundreds of hours of attorney time to advocate for equal treatment of religious people in public life. Among other cases, Baker Botts represented members of the Lipan Apache Tribe of Texas in a lawsuit against the federal government after an undercover agent raided the tribe’s powwow and confiscated their sacred eagle feathers. Baker Botts also represented the Roman Catholic Archdiocese of Galveston-Houston in a brief supporting Becket’s case seeking equal access to FEMA funds for houses of worship following natural disasters.

“As the leader of a prominent congregation, Rabbi Dr. Meir Soloveichik has worked side-by-side with leaders of diverse faiths to preserve religious liberty for all. He has rightly earned this year’s Canterbury Medal. I am confident his work as a defender for religious liberty has just begun,” said Bill Mumma, CEO and Board Chairman of Becket.

For more information or to arrange an interview with a Becket attorney, please contact Melinda Skea at  media@becketlaw.org or 202-349-7224. Interviews can be arranged in English, Chinese, French, German, Portuguese, Russian and Spanish.