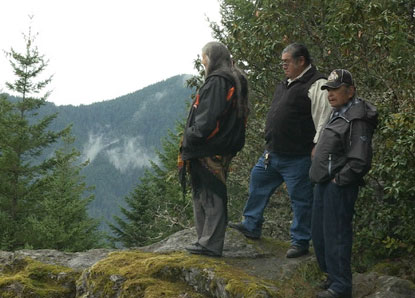 WASHINGTON, D.C. – Members of the Klickitat and Cascade tribes in Oregon were denied justice late Friday after a federal magistrate judge ruled that the government is free to bulldoze sacred Native American burial grounds and destroy sacred artifacts. The tribal members plan to appeal the ruling in Slockish v. U.S. Federal Highway Administration, which dramatically narrows the religious freedom rights of Native Americans by saying that a key federal religious freedom law cannot be used to protect their artifacts and sacred sites. (Watch their story.)

In 2008, while widening Highway 26 near Mount Hood, the Federal Highway Administration destroyed a sacred site that included a stone altar, ancient burial grounds, a campground, and trees and medicinal plants used for religious rituals. Although tribal members repeatedly alerted officials to the importance of the site, and there were many ways to widen the highway while still protecting it, the government refused to listen and bulldozed the site.

“For centuries Native Americans have endured the destruction of sacred places by the federal government, and it’s heartbreaking that the court would say this completely preventable destruction was okay,” said Carol Logan, member of the Confederated Tribes of Grande Ronde. “All we want is the return of our sacred artifacts, the rededication of the area for our ancestors, and the promise that we can continue to worship as our tribes have done for centuries.”

The tribal members sought justice under a federal law called the Religious Freedom Restoration Act—which was enacted in 1993 after the Supreme Court neglected to protect religious freedom for Native Americans. Nevertheless, the magistrate judge’s opinion said, “Even where the government’s actions would virtually destroy a group’s ability to practice their religion the Constitution simply does not provide a principle that could justify upholding [their] legal claims.”

“The federal government has repeatedly shown a callous disregard for Native American religious beliefs,” said Stephanie Barclay, counsel at Becket. “For these tribes, this burial ground was their church. Our religious freedom laws wouldn’t allow the government to destroy other churches with impunity, and it shouldn’t be any different for Native Americans.”

Plaintiffs Wilbur Slockish and Johnny Jackson are Hereditary Chiefs of the Klickitat and Cascade tribes of the Yakima Nation and Carol Logan is an enrolled member of the Confederated Tribes of Grande Ronde.  They are joined in their lawsuit by the Cascade Geographic Society and the Mount Hood Sacred Lands Preservation Alliance. They are represented by Becket, together with Seattle-based law firm Patterson Buchanan Fobes & Leitch and Oregon City attorney James Nicita.