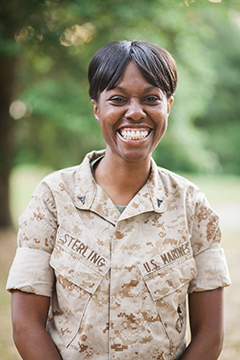 Washington, D.C. – The military’s highest court ruled yesterday that men and women serving in the U.S. Armed Forces can be punished for exercising their religion if judges deem the practice not religiously “important.” The ruling upholds the government’s criminal prosecution of a U.S. Marine for refusing to discard personal notes that had Bible verses on them. The case may now be appealed to the U.S. Supreme Court.

In 2014, Marine Lance Corporal Monifa Sterling was ordered to remove from her workstation three pieces of paper with a paraphrase from the Book of Isaiah, “No weapon formed against me shall prosper,” even though co-workers were permitted to keep nonreligious messages on their desks. She declined and was court-martialed. A lower court upheld Sterling’s court martial, rejecting her argument that her faith was protected by the Religious Freedom Restoration Act.

“This is a real-life example of why judges shouldn’t play theologians,” said Daniel Blomberg, legal counsel of Becket, which filed a friend-of-the-court brief supporting the Lance Corporal. “Here, a few judges concluded that keeping scripture nearby isn’t ‘important,’ even though more than half of the world’s population belong to religions that teach the exact opposite. Avoiding obvious errors like this is why RFRA protects all religious beliefs, not just beliefs that government officials deem ‘important.’”

The majority of judges on the Court of Appeals for the Armed Forces ruled that Lance Corporal Sterling’s posted verses were a “religious exercise” under RFRA and assumed that the exercise was sincere. But it held that, despite the court-martial Sterling faced for refusing to remove the verses, the military hadn’t placed a “substantial burden” on her religion because the court was not persuaded that she had a “subjective belief in the importance of [the] practice to her religion.” The dissent disagreed, arguing that RFRA “does not empower judges to curtail various manifestations of sincere religious belief simply by arbitrarily deciding that a certain act was not ‘important’ to the believer’s exercise of religion.” The dissent also noted that the majority’s ruling falls on one side of a “distinctive split among the federal circuit courts of appeals” which the “Supreme Court has yet to address.” That split may raise the likelihood that the Supreme Court would grant review of the case.

Becket filed an amicus brief explaining that the lower court’s ruling harms both service members and the military’s mission by limiting religious freedom. The brief was signed by a coalition of military veterans and military ministries from a variety of faith backgrounds—including Anglican, Catholic, Jewish, Lutheran, Mormon, Muslim, Presbyterian, Sikh, and Southern Baptist. Among them are the U.S.’s largest organization of Orthodox rabbis; the first Sikh soldier in a generation allowed to keep his turban and beard on active duty; and the ministries led by a recently retired U.S. Army Chief of Chaplains and senior veteran chaplains from the Army, Air Force, and Marines.

“Last I checked, Marines weren’t afraid of anything—and they certainly don’t need to be afraid of religious liberty,” said Blomberg. “In fact, it was the military itself that taught our young country how protecting religious liberty is good for our nation, good for mission accomplishment.”

Oral argument was heard in April 2016. The Lance Corporal is represented by the First Liberty Institute and Paul Clement of Bancroft PLLC.

Becket is a non-profit, public-interest law firm dedicated to protecting the free expression of all religious traditions and has a 100% win-rate before the United States Supreme Court. For over 20 years, it has defended clients of all faiths, including  Buddhists, Christians, Jews, Hindus, Muslims, Native Americans, Sikhs, and Zoroastrians  (read more here).