Little Sisters of the Poor Receive Knights of Columbus’ Highest Award Given in exceptional circumstances, past recipients include Mother Teresa 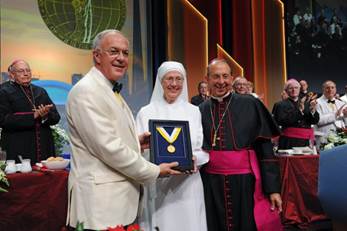 WASHINGTON, D.C. – For the Little Sisters of the Poor’s  service to the elderly poor and commitment to their Catholic beliefs, the Knights of Columbus awarded its highest honor the Gaudium et Spes Award. Knights of Columbus Supreme Knight, Carl Anderson, presented the award to Mother Loraine Marie Maguire, Superior of the Sisters’ Baltimore Province on August 2 at the Allsteam Centre in Toronto, host city of the Knights’ yearly convention.

“It is a privilege for us to care for the most vulnerable members of our society; serving them, comforting them, being a loving and healing presence in their lives,” said  Mother Loraine Marie Maguire, mother provincial for the Little Sisters of the Poor. “Just being a ‘Little Sister to them’ is our joy.”

Founded in 1852 to serve the elderly poor, the Sisters are a “truly inspiring community of religious sisters for their wholehearted response to the Gospel, [and] for recognizing Jesus in the face of the poor,” noted the award citation, read by Knights of Columbus Supreme Chaplain Archbishop William Lori of Baltimore.

The Little Sisters became a household name when they were ordered to take actions that would have triggered coverage of drugs and devices, such as the week after pill, in their employee health plan. They stood firm in their refusal to do so in spite of the threat of $70 million per year in government fines. They appealed all the way to the U.S. Supreme Court, represented by Becket and supported by the generosity of the Knights. Last spring the Supreme Court told the government they could not fine the Sisters, vacated all lower court decisions against them, and instructed the government to work on a solution that respected the Sisters’ religious beliefs.

While in Washington, D.C. last year, Pope Francis visited the Little Sisters to show his solidarity. He later wrote: “Precisely for the sake of this dignity of conscience, the Church strongly rejects the forced state intervention in favor of contraception, sterilization, and even abortion.”

Named for the landmark Second Vatican Council document, the Gaudium et Spes (Joy and Hope) Award is the highest honor bestowed by the Knights of Columbus, the world’s largest Catholic fraternal benefit organization, which has more than 1.9 million members.

Awarded only in special circumstances to individuals of exceptional merit, the first recipient was Blessed Mother Teresa, in 1992, and the last recipient was the late Cardinal Francis George of Chicago, in 2015.

For more information or to arrange an interview with a Becket attorney, please contact Melinda Skea at  media@becketlaw.org  or 202-349-7224.

Becket is a non-profit, public-interest law firm dedicated to protecting the free expression of all religious traditions. For over 20 years, it has defended clients of all faiths, including  Buddhists, Christians, Jews, Hindus, Muslims, Native Americans, Sikhs, and Zoroastrians (read more here)