Finally! US Army allows Sikh Bronze Star Medalist to serve American military catches up to United Kingdom and Canada by including Sikhs 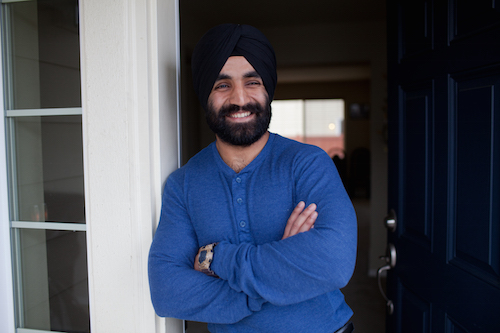 WASHINGTON, D.C. –  Bronze Star Medal recipient, Army Captain Simratpal Singh, will continue to serve our country with his religious turban and beard in place. In response to a lawsuit brought by Becket, the Army issued a decision late Thursday evening conceding that allowing beards for medical reasons but banning them for religious reasons discriminates against Sikh Americans by needlessly barring them from serving their country.

“The Army needs courageous men like Captain Singh who are willing to fight for what’s right,” said Eric Baxter, Senior Counsel at Becket, which represents Captain Singh. “He’s already proven he is willing to sacrifice his life for the freedoms of others. Hooah to the Army for finally letting him enjoy his own religious freedom!”

Captain Singh is a West Point graduate, an Army Ranger, and a Bronze Star Medal recipient, yet the Army threatened to discharge him for wearing a turban and beard as required by his Sikh faith. The Army’s stance was absurd, especially considering that Sikhs serve without controversy in militaries around the world, including in Australia, Canada, India, and the United Kingdom. Moreover, at any given time, roughly 100,000 soldiers in the U.S. Army have exemptions for medical beards. Special Forces in Afghanistan have also frequently grown beards under relaxed grooming standards applied on the front lines. (Read the NYT article here.) The lawsuit was brought under the Religious Freedom Restoration Act, which serves to protect religious minorities against mindless bureaucratic action.

“I’m proud to be an American soldier,” said Captain Singh. “More than ever, the military needs to reflect the diversity of our great nation. I’m grateful the Army is allowing me to serve without being forced to compromise my religion.”

“This decision gives hope that our nation’s largest employer is making progress towards permanently ending a policy of religious discrimination,” said Harsimran Kaur, legal director of the Sikh Coalition.

Captain Singh initially received a temporary accommodation in mid-December, allowing him to report to his new assignment in Fort Belvoir, Virginia, with beard and turban in place. In early March, however, the Army tried to subject him to heightened testing for his gas mask and safety helmet, even though he had already passed the standard safety testing all soldiers undergo. On March 4, 2016, a  U.S. District Court in D.C. ordered the Army to stop imposing discriminatory testing and to treat Captain Singh under the same rules that apply to everyone else. The Army’s decision yesterday confirms that Captain Singh’s religious turban and beard have no impact on his ability to serve.

Becket is joined by attorneys from the Sikh Coalition and McDermott Will & Emery in representing Captain Singh. On Wednesday March 29, 2016, they filed a similar suit on behalf of three other observant Sikhs—Specialist Kanwar Bir Singh, Specialist Harpal Singh, and Private Arjan Singh Ghotra.