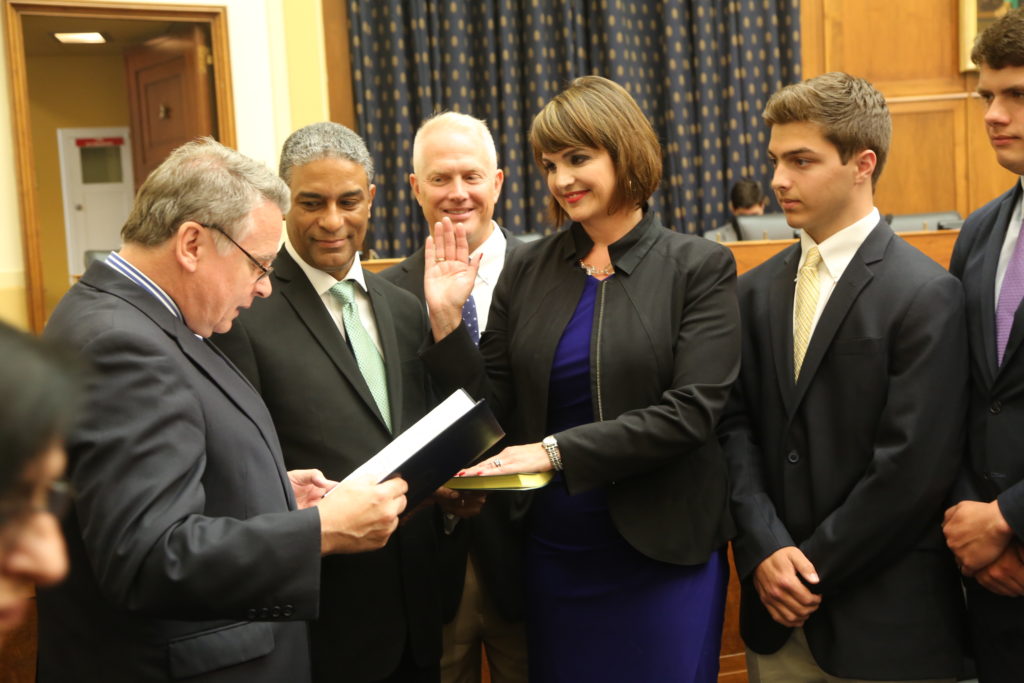 WASHINGTON, D.C. – The Bible on which Kristina Arriaga de Bucholz, executive director of Becket, rested her hand while she took the oath of office as Commissioner to the U.S. Commission on International Religious Freedom (USCIRF) today was held by Amnesty International prisoner of conscience and Afro-Cuban dissident, Dr. Oscar Elias Biscet.

“Dr. Biscet has been arrested multiple times, and severely tortured and beaten for living according to his deeply held religious convictions while advocating for peaceful change in Cuba,” said Arriaga. “I hope that in my position at USCIRF I am able to raise awareness of his plight and the plight of so many others around the world who want to live according to their conscience.”

Kristina Arriaga de Bucholz, a Cuban American herself, was appointed to the Commission earlier this year by the Speaker of the House Paul Ryan. Congressman Chris Smith, Chairman of Commission of Security and Cooperation in Europe, officiated the swearing-in which took place immediately before a House Committee of Foreign Affairs hearing on human rights violations in Cuba.

“The Bible on which I took the oath has its own remarkable story, originating from Ghana, where as many as 600,000 African slaves were taken and sent to Cuba,” said Arriaga. “I picked this Bible to remind myself that we are each called to prevent such atrocities from ever happening again. Every man and woman is born with dignity and should be treated accordingly.”

Arriaga is sought out as an expert on religious liberty issues. She has written numerous articles on the topic, has spoken at several conferences and has appeared on multiple television and radio programs including MSNBC, C-Span, FOX and NPR. She is happily married to a retired Marine-turned-businessman, Matthew Bucholz. They have three teenagers.

For more information or to arrange an interview, please contact Melinda Skea at media@becketlaw.org or 202-349-7224. Interviews can be arranged in English and Spanish.