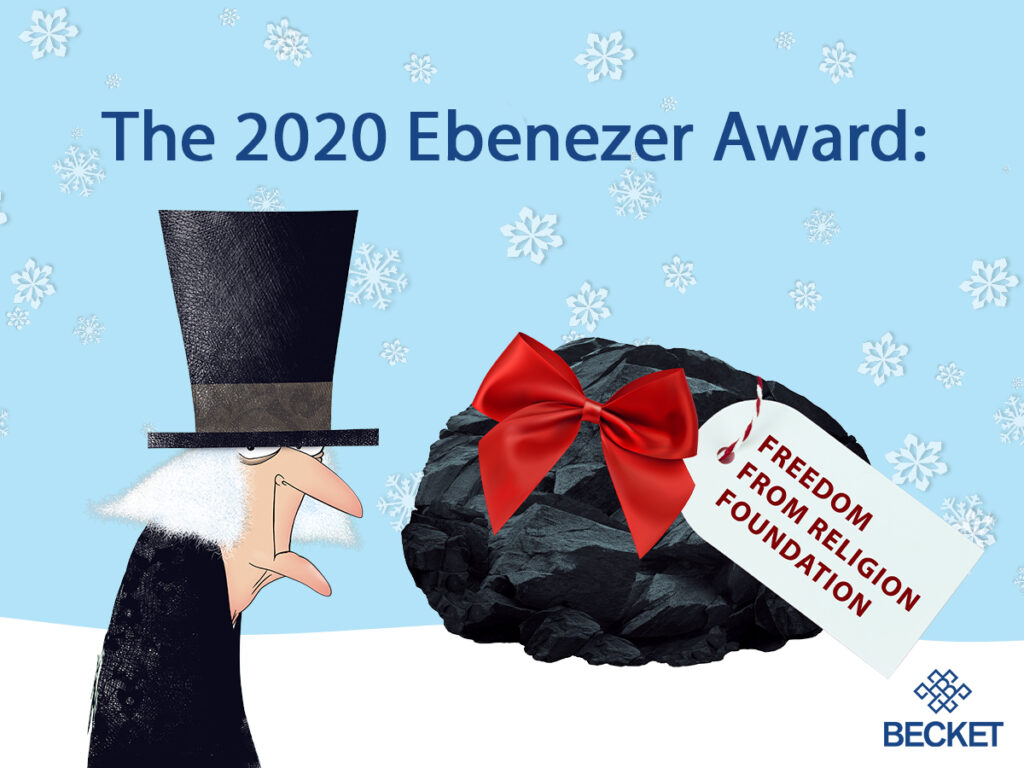 WASHINGTON – As if things weren’t bad enough this holiday season, America’s most notorious grinches, the Freedom from Religion Foundation (FFRF), a noted anti-Christmas activist group, has found a way to steal presents from children. Last month, FFRF intimidated a Kansas school district into canceling its annual charity drive that sends Christmas gifts and necessities to underprivileged children abroad. The reason: the drive was sponsored by Samaritan’s Purse, a Christian international disaster relief organization – and FFRF can’t abide the thought of a religious organization helping school children spread Christmas cheer. FFRF’s crusade makes the Grinch’s ransacking of Whoville look tame, which is why the atheist organization has earned Becket’s lowest (dis)honor, the 2020 Ebenezer Award, awarded for the biggest bah humbug of the holiday season.

As part of Operation Christmas Child, students at Liberty Middle School in Pratt, Kansas, were anticipating partaking in a charity drive to gather Christmas gifts and other necessities to send to underprivileged children abroad. But the school district abruptly canceled the program after FFRF attorney, Chris Line, sent a letter to the district’s superintendent claiming that “[o]rganizing a donation drive that for all intents and purposes employs school staff and resources to convert people to Christianity violates basic constitutional principles.” Regrettably, FFRF’s stunted idea of how constitutional law (and gift drives) work and their general aura of Grinchiness succeeded in shutting the charitable endeavor down. However, Samaritan’s Purse invited kids to send shoeboxes regardless of the school program, trying to avoid the chilling effect of FFRF’s Grinch-like campaign to “stop Christmas from coming!”

“Worse than taking candy from a baby, FFRF is stealing Christmas presents from impoverished children,” said Montse Alvarado, executive director of Becket, “The Constitution does not require Americans to quarantine their faith when they go to class. In a year when hope and joy are scarce, intimidating school children into abandoning charity is shameful and wrong.”

Each year the Christmas and Hanukkah season inspires a slew of outrageous offenses against the free exercise of religion. At Becket, we do Santa’s dirty work for him, delivering a lump of coal as an acknowledgment of scroogery on a grand scale. Previous Ebenezer Award winners include Dunwoody, Georgia City Counsel which banned all religious symbols in response to an email from a disgruntled citizen, the Department of Veteran Affairs, which banned employees at its Salem, Virginia facility from saying “Merry Christmas” to veterans, and the University of Minnesota, which three years ago banned from campus the colors red, green, blue, and silver; Santas; bows; dreidels; and even wrapped presents. (See list of previous winners).

In this year of unprecedented violations of civil liberties, we would be remiss if we didn’t acknowledge the everyday scroogery of our COVID curmudgeons in high office. The Ebenezer Award runners-up are none other than Governor Cuomo of New York, Governor Gavin Newsom of California, and Governor Sisolak of Nevada, who are barring the doors of houses of worship and turning Americans out into the cold innkeeper-style this Christmas and Hanukkah (read more here).

Finally, this year’s Eggnog Toast, given to an individual or group who has shown persistence in the face of adversity, goes to two Wisconsin state representatives, Paul Tittl and Shae Sortwell, who wanted to spread Christmas cheer after the governor tried to cancel the annual capitol Christmas tree. Although their permit to erect a tree was denied, Tittl and Sortwell took the initiative to put up their own tree anyway – and then put up a second tree when the first one was removed. We salute them for their dedication to good cheer!

“This year, of all years, Americans ought to come together in the Christmas season to support one another and spread joy and hope,” said Alvarado. “True to form, FFRF is hell-bent on purging the holiday season of any whiff of its true meaning. Let’s hope their hearts grow a few sizes this Christmas.”

Becket wishes everyone a Merry Christmas, a Happy Hanukkah, and a Joyous New Year!