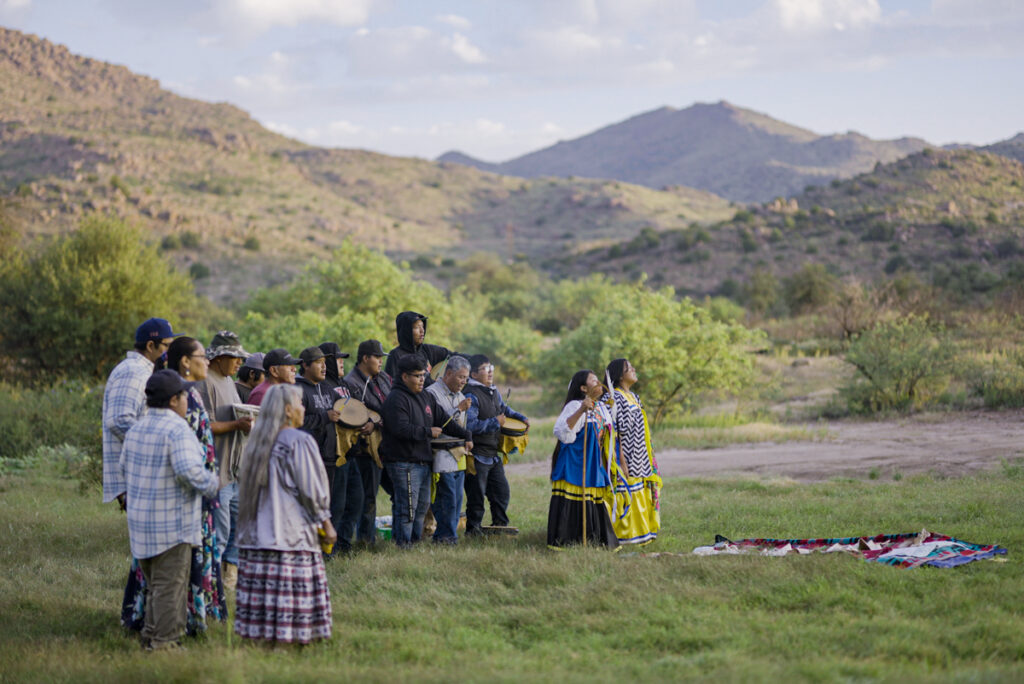 SAN FRANCISCO – Apaches from Arizona were in federal court today to save their sacred site known as Oak Flat from being destroyed by a copper mine that would swallow their holy ground in a nearly 2-mile-wide crater deeper than the Eiffel Tower. If the court doesn’t intervene, the government will turn this historically protected land over to a foreign-owned mining company that will obliterate the sacred ground where the Apaches conduct their most important religious ceremonies.

Apache Stronghold is asking the Ninth Circuit to halt a land transfer to a foreign-owned mining company, which plans to destroy a traditional Apache sacred site as part of a multi-billion-dollar copper-mining plan. Oak Flat – known in Apache as Chi’chil Biłdagoteel – is part of the Tonto National Forest in Arizona. The federal government has protected the land from mining interests for more than six decades, recognizing that the Western Apaches and other tribes have long celebrated sacred ceremonies and gathered natural resources from the area. The worship of Western Apaches is inseparable from Oak Flat, where they gather medicinal plants, visit sacred springs, and conduct essential ceremonies such as the coming-of-age Sunrise Ceremony for Apache women—practices which cannot happen anywhere else.

Unfortunately, a midnight rider was slipped into a must-pass defense bill in 2014, directing the government to transfer the land to Resolution Copper, a foreign-owned mining company whose parent company, Rio Tinto, recently destroyed a sacred 46,000-year-old Aboriginal site in Australia. Now Apache Stronghold, a coalition of Apaches, other Native peoples, and non-Native allies, has asked the court to stop the land transfer because it would violate the Religious Freedom Restoration Act and the Free Exercise Clause of the First Amendment.

“The brazen destruction of a sacred site like Oak Flat is a tragic reminder of how terribly the United States government has treated, and still treats, Native peoples,” said Luke Goodrich, vice president and senior counsel of Becket. “This kind of abuse would never be tolerated for other faith groups, and it is long past time for the courts to stop this injustice.”

A ruling in this case is expected in the coming months. In addition to Becket, Apache Stronghold is represented by attorneys Michael Nixon and Bill Carpenter.