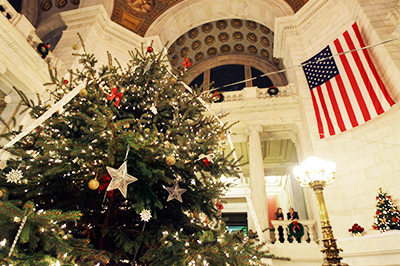 Becket Law is pleased (well, sort of) to announce the recipient of our lowest honor, the 2012 Ebenezer Award, which is given annually to the public figure responsible for the most ridiculous affront to Christmas and Hanukkah.

DRUM ROLL PLEASE……..The 2012 award goes to Rhode Island Governor Lincoln Chafee. Governor Chafee was embarrassed last year when a flash mob showed up to the lighting of his Holiday Tree and defiantly sang “O Christmas Tree.”  To avoid a repeat this year, he announced the lighting ceremony only 30 minutes before it happened.  Heaven forbid the joyful singing of “O Christmas Tree” would happen again by the tree…at Christmas time. As Wall Street Journal’s Bill McGurn explains:

“In this time of peace on Earth and good will to men, we give thanks for the little things that help to make the season bright: chestnuts roasting on open fires, tiny tots with their eyes all aglow—and the entertaining progressive pageant that is Lincoln Chafee at Christmastime.”

However, not all is lost this holiday season. This 2012 Becket Eggnog Toast goes to the State of Pennsylvania for reinstating their Christmas tree after 30 years, and the management of Newhall Senior Home for repenting and rescinding its decision to take down the Christmas tree from the community room because it was a “religious symbol.”  Good decision, Newhall.

So, while it is still legal, we wish you: A Merry Christmas, a Happy Hanukah and a Happy New Year!

Becket Law is a non-profit, public-interest law firm dedicated to protecting the free expression of all religious traditions. For over 20 years, it has defended clients of all faiths, including: Buddhists, Christians, Jews, Hindus, Muslims, Native Americans, Sikhs, and Zoroastrians. Its recent cases include two major Supreme Court victories: the landmark ruling in Burwell v. Hobby Lobby, and the 9-0 ruling in Hosanna-Tabor v. EEOC, which The Wall Street Journal called one of “the most important religious liberty cases in a half century.”