And the 2010 Ebenezer Award goes to… - Becket
Skip to Content 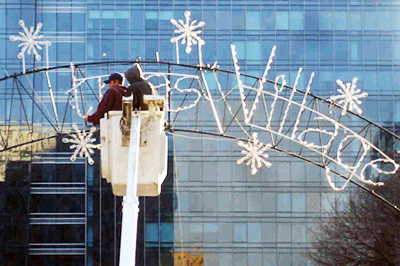 Washington, DC – Becket is pleased (well, sort of) to announce the recipient of our 2010 Ebenezer Award, which is given annually to the public figure responsible for the silliest affront to Christmas and Hanukkah — as well as our first Eggnog Toast Award, which will be given occasionally (in years when somebody deserves it) to public figures who come to their senses and get things at least partially right.

This year’s Ebenezer goes to Philadelphia Deputy Mayor, Richard Negrin, for forcing the “Christmas Village” to take “Christmas” off its traditional entry archway and replace it with the word “Holiday”.

And our first-ever Eggnog Toast Award goes to his boss, Mayor Michael Nutter, who, after a public outcry, had an epiphany of sorts and ordered the word “Christmas” put back up.

“We remain hopeful, after Mayor Nutter’s epiphany about the archway, that a future epiphany will result in the rest of official Philadelphia celebrating both Christmas and Hanukkah in their own names, rather than as anonymous “Holidays,” said Kevin J. “Seamus” Hasson, Becket’s founder and president.

The Ebenezer, a stocking with a lump of coal in it, is on its way to Deputy Mayor Negrin, and a Starbucks gift card is headed to Mayor Nutter.

Notable previous Ebenezer recipients include: (2009) Commissioner Tyler Moore, of Kokomo Indiana, who replaced a traditional display with one featuring the Loch Ness monster, a woodpecker and a fire truck; (2002) the Virginia Beach bureaucrats who tried to ban a local charity’s free turkey giveaway; and (2000) the city manager of Eugene, Oregon, who issued a five-page, single-spaced memo banning Christmas trees from any “public space” in the city.

Becket  is a non-profit, public-interest law firm dedicated to protecting the free expression of all religious traditions. For over 20 years, it has defended clients of all faiths,  including Buddhists, Christians, Jews, Hindus, Muslims, Native Americans, Sikhs, and Zoroastrians. Its recent cases include two major Supreme Court victories: the landmark ruling in Burwell v. Hobby Lobby, and the 9-0 ruling in Hosanna-Tabor v. EEOC, which The Wall Street Journal called one of “the most important religious liberty cases in a half century.”