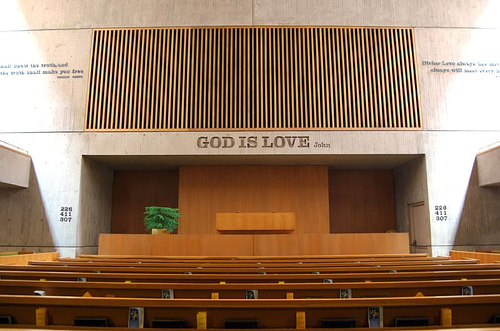 After years of litigation, Washington DC’s Third Church of Christ, Scientist finally won its battle with DC preservationists, and will soon enjoy a new church building. Its previous building was an eyesore with the dubious honor of being a landmark of the “Brutalist” style, a 1960s French school that emphasizes large expanses of windowless raw concrete. The previous bunker-like structure had blighted a corner just a few blocks north of the White House for forty years, and was often mistaken by unwitting tourists for a fallout shelter.

Originally an architectural “experiment”, the church building was first designed without the local congregation’s input into the architect’s ‘artistic vision.’ The Brutalist structure thus never met the church’s needs and in fact sent a message counter to the church’s. Instead of welcoming visitors and newcomers and portraying the church as a positive contribution to the neighborhood, the imposing concrete building had few windows, an entrance that was difficult to find, and a stifling atmosphere. It was frequently compared to a “concrete straitjacket.”

When the congregation first decided that it could no longer suffer the Brutalist structure and attempted to replace it, the DC Historic Preservation Review Board retaliated by designating the building as a landmark—forcing the church to preserve a building that was unwelcoming and unstable. That’s when Becket stepped in to defend the church.

The church argued that the preservation board was interfering with its First Amendment right to exercise its religion. The building’s imposing architecture hampered the church’s message and its ministry. Religious liberty required that the church be able to decide how best to use its property in accordance with its faith.

Finally, in 2014, after several years of litigation, the Church prevailed. It demolished the old Brutalist bunker and began the process of building a new, light-filled building. It has hired world-renowned architect Robert A.M. Stern to design a new building that meets the needs of a downtown church while also contributing to the beauty of the surrounding area. Now the church can move forward in its mission, celebrating a hard-fought victory for both beauty and religious liberty.