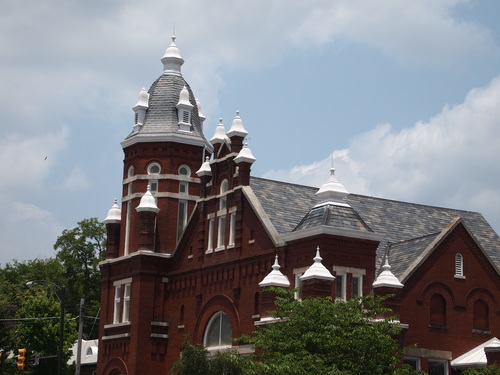 Temple B’nai Sholom is a Reform Jewish synagogue with a long history in Huntsville, Alabama. Founded in 1876, it has occupied its present location since 1899. The Temple sanctuary has been designated a Historic Building, and was extensively renovated in the mid-1990s.

In the 1970s, the Temple purchased two adjacent pieces of property in order to have room for future expansion. Each parcel contained a house, neither of which were of historic significance, although the entire area lies within an historic preservation district. One of the houses was demolished many years ago without any objection from the city or the Historic Preservation Commission, and other property owners in the area, including several nearby churches, have been allowed to demolish similar buildings.

On September 15, 2000, city code enforcement officials issued a notice declaring the house at 406 Clinton Avenue unsafe, and ordering the Temple to either “repair or demolish” the structure. Since the Temple intends to use the site for religious activities, including eventual expansion of the sanctuary, it sought permission of the Huntsville Historic Preservation Commission to demolish the house.

On November 20, 2000, the Commission refused, leaving the Temple in an impossible “Catch 22” situation: ordered by one city agency to demolish the house, and prohibited by another from doing so. To add insult to injury, the city then sought a criminal misdemeanor conviction against the Temple for its failure to obey the order to “repair or demolish.”

Finally, on May 8, 2001, Temple B’nai Sholom filed suit in Madison County Circuit Court against the City of Huntsville, the head of the city’s Inspection Department, and the administrator of the city’s Historic Preservation Commission. On June 1, 2001, defendants moved to remove the case from county court and move it instead to U.S. District Court for the Northern District of Alabama.

In October 2001, the Becket Fund for Religious Liberty joined the case, and an amended complaint was filed on October 23, 2001. It charged the city with violations of the Constitutions of Alabama and the United States and RLUIPA. On November 2, 2001, the city moved to strike the amended complaint and renewed their motion to dismiss. On November 6, Judge Smith summarily denied both motions. In February, 2002, Alabama Attorney General Bill Pryor filed a motion for leave to join the suit on the Temple’s side, to defend the state’s Religious Freedom Amendment. (Temple B’nai Sholom v. City of Huntsville, et al., CV-01-S-1412-NE)

Interestingly, the City of Huntsville itself had burned down a number of houses of approximately the same vintage as the house at 406 Clinton Avenue at about the same time it took action against Temple B’nai Sholom. City Community Development Director Jerry Galloway was quoted in an article in the Huntsville Times as saying, “We have an obligation to the public to get rid of stuff that’s a danger to the public health and safety, and this property was.”

Although the city initially adopted a strategy of challenging the constitutionality of RLUIPA and sought the assistance of the statute’s most vehement critic, law professor Marci Hamilton, in the end it agreed to settle the case “in order to avoid the expense, inconvenience, and uncertainty of litigation.” (Along the way, both the City of Huntsville and the Alabama Preservation Alliance joined in an amicus brief challenging RLUIPA’s constitutionality, written by Hamilton and submitted to the Seventh U.S. Circuit Court of Appeals in C.L.U.B. v. City of Chicago.)

The settlement, approved by the Huntsville City Council on June 26, 2003, provides that the City of Huntsville will purchase the house at 406 Clinton Avenue for $25,000 and will pay to have the house moved to a vacant lot that the city owns at the corner of Dallas and Walker Streets. The settlement agreement also commits the city’s Historic Preservation Commission to “work with the Temple in good faith toward the issuance of a Certificate of Appropriateness approving the Plans [for the Temple’s expansion] and the project implementing the Plans within a reasonable and customary time period.”

Having given the Temple everything it sought in the lawsuit, the city nevertheless inserted language at the end of the agreement stating that it still refuses to concede that either RLUIPA or the Alabama Religious Freedom Amendment are “valid laws.”