In 2006, the City of Euless, Texas tried to stop Jose Merced, a Santeria priest, from performing religious rituals in his home. The city’s actions threatened Mr. Merced’s religious practice as well as the very existence of the Santeria religion, which relies on sacred rituals such as animal sacrifice in order to induct new priests. Becket represented Mr. Merced, arguing that the city had other ways to achieve its goal of protecting public health and animal treatment—and that it could do so without violating Mr. Merced’s religious liberty. In July 2009, the U.S. Court of Appeals for the Fifth Circuit agreed with Becket and protected Mr. Merced’s right to freely practice his religion in his home.

On July 31, 2009, the U.S. Court of Appeals for the Fifth Circuit ruled in favor of Jose Merced, protecting his right to freely practice his Santeria religion and affirming the Texas Religious Freedom Restoration Act.

Why I Defend Goat Sacrifice 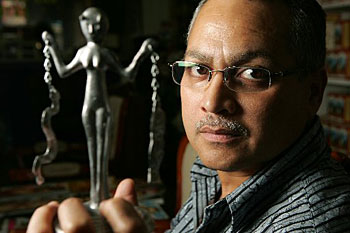 “Ask not why I defend goat sacrifice. Ask me how you can too.”
-Eric Rassbach, Vice President & Senior Counsel at Becket

An ancient religion carries out a unique tradition

Jose Merced is a priest in the Santeria faith, an Afro-Caribbean religion with roots that go back centuries in West Africa, and later evolving into new forms in Cuba and the Americas. Central to the Santeria religion is the passing on of rituals and beliefs from generation to generation. One of these sacred rituals includes animal sacrifice, which is performed humanely and privately for worship, healing, or the initiation of new priests.

As a Santeria priest, Mr. Merced regularly carried out these sacred religious rituals within his home in Euless, Texas. But in 2006, city officials tried to stop him from practicing his religion, threatening the very existence of the Santeria faith.

In 2006, officers from the City of Euless, Texas appeared at Mr. Merced’s home and informed him he could not perform his religious rituals in his own home, claiming that his practices violated city ordinances.

Becket stepped in, with Douglas Laycock (Robert E. Scott Distinguished Professor at the University of Virginia School of Law), to represent Mr. Merced at the U.S. Court of Appeals for the Fifth Circuit. Although the government argued two reasons for forbidding the practice—public health and animal treatment— Becket pointed out that the city had never enforced their ordinances against Mr. Merced in 16 years, and that the city had broad secular exemptions to these ordinances, such as hunting, fishing, meat production, pest control, and veterinary euthanasia. In fact, the city was selectively enforcing its ordinances against Mr. Merced because of his religion.

On July 31, 2009, a unanimous panel of the Fifth Circuit sided with Becket. The court said that city ordinances forbidding the slaughter of certain animals prevented the Santeria priest from performing ceremonies essential to his faith, which was a substantial burden on his religious exercise. The court pointed out that Mr. Merced had conducted these rituals for 16 years without incident, and that the government had other ways to protect public health and animal treatment without forbidding Mr. Merced from practicing his religion in his home.

The Fifth Circuit’s ruling was an important ruling under the Texas Religious Freedom Restoration Act, protecting the right to worship freely in one’s own home.