Eleanor McCullen has spent decades exercising her religion by offering help and support to women in need outside of abortion clinics. Knowing that women often have abortions when they feel they have no place to turn for love and support, Eleanor has made it her mission to offer a loving, friendly smile, sympathetic ear and much-needed resources like housing, medical care, sonograms and food supplies to women who wish to have their babies. Starting in 2000, however, Massachusetts tried to make it illegal for Eleanor and other sidewalk counselors to offer alternatives to women walking toward abortion clinics. By 2007, state law imposed a 35-foot buffer zone around every abortion clinic in the state. The buffer zone law prohibited Eleanor from continuing her ministry, making it a crime for her to say something as simple as “good morning” to the women entering the clinic. Represented by Becket President Mark Rienzi, Eleanor brought her case to federal court, where she lost in 2008, and to the U.S. Court of Appeals for the First Circuit, where she lost in 2009. Finally, in June 2014, the U.S. Supreme Court ruled 9-0 for Eleanor, stating that the government should not deprive people of the right to exchange information, ideas, and support on public sidewalks.

On June 26, 2014, the Supreme Court ruled unanimously that the Massachusetts buffer zone law violated the First Amendment because it overly interfered with people’s rights to converse and interact with others. 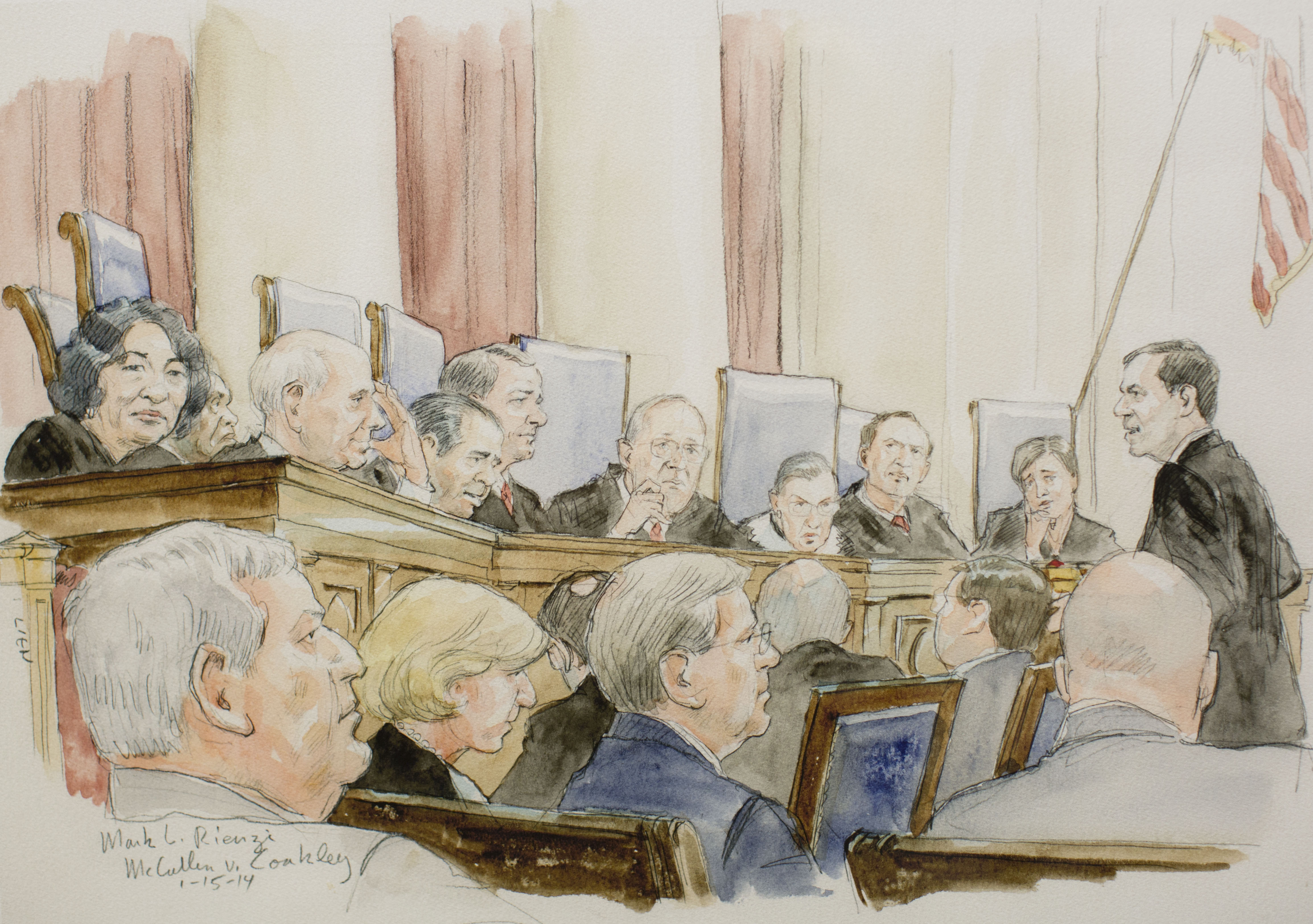 Meet Eleanor McCullen, who ministers to women in crisis

Since 2000, Eleanor McCullen has knitted baby hats and lovingly counseled women outside of abortion clinics near her home in Massachusetts. Driven by her faith, Eleanor aspires to see mothers become parents and to see families flourish by supporting an expectant mother’s decision to say yes to life. As a sidewalk counselor, Eleanor ensures struggling women she meets outside the clinic do not feel alone in their journey, and that, while it may not seem like it, they have a choice. She also directs expectant mothers to important resources such as housing, medical care, sonograms, and food supplies. She even hosts baby showers.

But starting in 2000, the State of Massachusetts passed a series of laws that threatened free speech—and Eleanor’s ability to give women the support they willingly accepted.

By 2007, Massachusetts had imposed a 35-foot buffer zone around every abortion clinic in the state. The law made it illegal for Eleanor to have conversations with women who wanted her help on the sidewalks in front of abortion clinics.  Instead, Eleanor was forced off the sidewalk, away from the clinic, and at times into the streets

The buffer zone not only restricted Eleanor’s freedom of speech, but also religious freedom. Eleanor is motivated by her faith to help women in need. A Catholic priest, who joined Eleanor in her lawsuit, wanted to provide religious counseling to women in need.  Another individual simply wanted to stand silently on the sidewalk and pray. Yet the Massachusetts’s law banned all of these peaceful activities. By stopping religious people from offering help to women in need, the law also harmed countless women by depriving them peaceful and often welcomed offers of help.  [There is a heartbreaking brief by women who WISH they’d had such help outside of abortion clinics.

In January 2008, Becket President Mark Rienzi co-counsel Michael DePrimo, and lawyers from Alliance Defending Freedom represented Eleanor in federal court. The court ruled against Eleanor in August 2008. In July 2009, Eleanor lost again on appeal at the U.S. Circuit Court of Appeals for the First Circuit. She appealed to the U.S. Supreme Court, which agreed to hear the case.

Central to the First Amendment is the right to a free and peaceful exchange of ideas, which requires an individual’s ability to have personal conversations and distribute literature in public places. Under the new law it would have been a crime punishable with jail time if Eleanor so much as uttered, “Good morning, Jesus loves you,” to a passerby.

In January 2014, Becket President Mark Rienzi argued the case before the Supreme Court. On June 26, 2014, the Supreme Court ruled unanimously that the Massachusetts buffer zone law violated the First Amendment because it overly interfered with people’s rights to converse and interact with others.