Coach Kennedy, a former high school football coach, was at the Supreme Court to defend his right to kneel in brief, quiet prayer at midfield after games. Becket filed a friend-of-the-court brief in the case, arguing that religious expression is a rich part of our national traditions and can’t be banned in public life simply because some onlookers might find it uncomfortable.

After the United States Supreme Court agreed to hear the case, Becket filed an amicus brief on March 2, 2022. On June 27, 2022, the Court ruled to protect Coach Kennedy’s religious expression. The decision also put an end to the Lemon Test, a vague legal standard that courts used to decide Establishment Clause cases. The Supreme Court confirmed that the Establishment Clause should be understood through America’s history and tradition of robust, public religious expression. Coach Kennedy was represented by First Liberty Institute, Paul Clement and Erin Murphy of Clement Murphy PLLC, and The Helsdon Law Firm, PLLC. 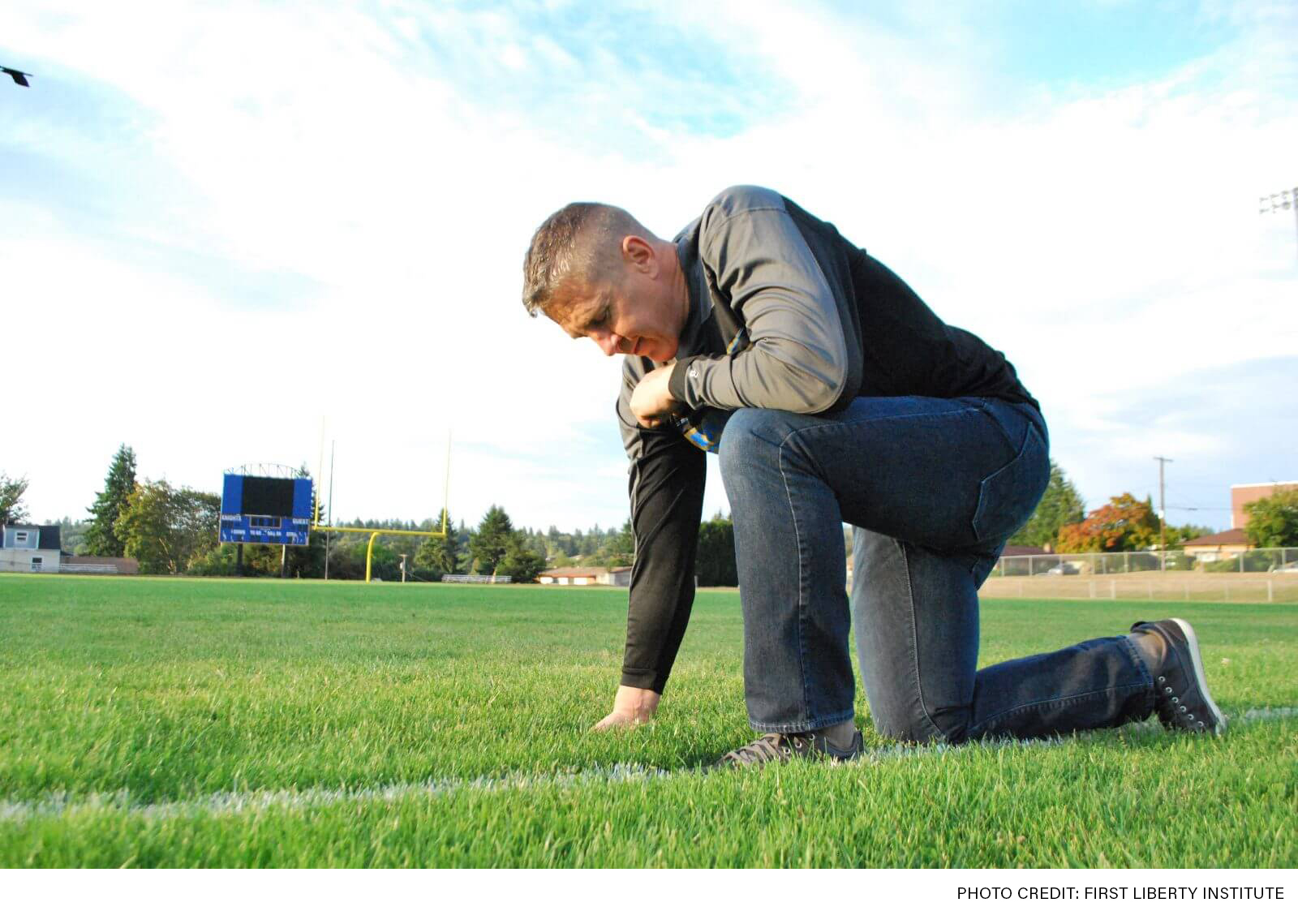 For eight years, Coach Joseph Kennedy helped lead the football team at Bremerton High School, a public school in Washington. Win or lose, Kennedy would walk to the 50-yard-line after the game, kneel for a few seconds, and thank God in quiet prayer. Eventually, some players asked if they could join Coach Kennedy. He told them, “This is a free country,” and “You can do what you want.” The students soon noticed the tradition and would voluntarily join the coach on the field for an uplifting and unifying message, inviting players from opposing teams to listen in.

Six years off the field and in court

Coach Kennedy filed a lawsuit against Bremerton School District in 2016 and asked to continue coaching while the case made its way through the court system. The request made it all the way to the United States Supreme Court, where it was ultimately denied and sent back down to the district court to further develop the case. In the decision, four Justices expressed serious concern about how the school district had interpreted the First Amendment.

After the lower courts again sided with the school district, the Supreme Court agreed to hear the case. Becket submitted a friend-of-the-court brief on behalf of the U.S. Conference of Catholic Bishops on March 2, 2022.

Public prayer is not a boogie man

The Ninth Circuit Court of Appeals ruled that the Constitution’s Establishment Clause required the school to ban Coach Kennedy from praying because permitting it would amount to government “endorsement” of religion. The school district’s lawyers have gone even further, labeling Coach Kennedy’s quiet prayers as “coercion” that the government must censor, because an onlooker might not feel comfortable seeing prayer in public.

But that’s not how the Constitution works. The First Amendment lets individual people—not the government—decide whether and how to pray. Becket’s friend-of-the-court brief at the Supreme Court explains a basic truth about public religious expression – it’s a normal and natural part of our culture and shared history as a country and is no more coercive than any other form of protected expression in the public square. Excluding religion—and only religion—from acceptable forms of public expression and inspiration says that something is inherently wrong and offensive about religion itself. The First Amendment takes that conclusion off the table. A coach doesn’t have to check his religion at the schoolhouse gates for fear that someone in the stands might feel offended.

On June 27, 2022, the United States Supreme Court ruled to protect Coach Kennedy, writing that Kennedy was pursued by the government “for engaging in a brief, quiet, personal religious observance doubly protected by the Free Exercise and Free Speech Clauses.” In its decision, the Court also decided to eliminate the Lemon test, a vague legal standard used to decide Establishment Clause cases. The Court confirmed that Lemon has long been dead, and that the Establishment Clause is understood through America’s history and tradition of religious pluralism. The opinion, authored by Justice Gorsuch, pointed to his recent concurrence in Shurtleff v. Boston, where he adopted Becket’s proposal for Lemon’s replacement: a standard rooted in the history and tradition of the Establishment Clause.