Bronx Household of Faith v. The Board of Education of the City of New York - Becket
Skip to Content

Bronx Household of Faith v. The Board of Education of the City of New York

Court strikes down NYC ban on churches meeting in schools 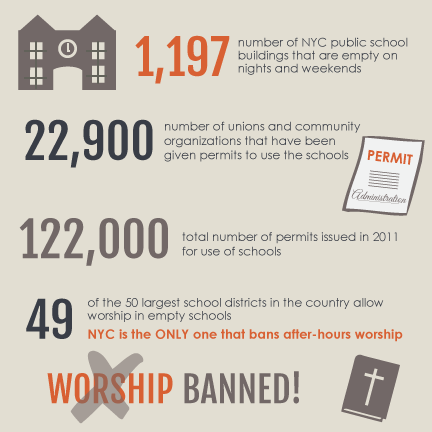 The Bronx Household of Faith is an inner-city church serving one of the roughest neighborhoods in New York City. Founded in 1971, it has spread hope in its local community for over forty years—serving local children, working with refugees, sponsoring neighborhood clean-ups, and providing emergency food and clothing.

But finding a church building in New York City isn’t easy. Land is expensive; rentals are scarce. For over a decade, the church had to meet in the pastor’s dining room.

Fortunately, New York City owns almost 1,200 buildings that sit empty on nights and weekends: its public schools. Each year, the City rents out empty schools to tens of thousands of community groups for any meetings that might be of interest to the community: Boy Scouts, drama clubs, taxpayer associations, senior citizen groups, sporting events, merchant associations, labor unions—you name it. In 2011 alone, the City issued over 122,000 permits for using the schools.

So Bronx Household, like tens of thousands of other community groups, applied to rent an empty school. Problem solved, right?

Thus began a legal battle that has lasted almost 20 years. The church was represented by the Alliance Defending Freedom, and Becket supported the church at every level of the federal courts along the way, filing friend-of-the-court briefs in 2002, 2011, 2012, and 2014.

Unfortunately, the New York-based United States Court of Appeals for the Second Circuit upheld the City’s ban, and the Supreme Court declined to hear the case. But shortly after the case ended, Mayor Bill de Blasio announced that the City would open its public schools to churches. So for now, the City and the churches have reached a truce. And Becket stands ready to protect churches against government discrimination.