The Gonzales brothers, Cesar and Diego, have each kept a small strand of hair uncut and braided since birth as a part of their religious faith. From kindergarten through sixth grade, the boys’ Texas school district granted them a religious exception to the grooming code, which forbids male students from having long hair. But when they entered seventh grade in the fall of 2017, the brothers were told that they would be banned from extracurricular activities unless they cut their hair. Because of their religious beliefs, Cesar was banned for two years from playing football and Diego was forbidden from participating in the student council, art, and computer programming clubs. On June 15, 2019, Becket sent a letter to Mathis Independent School District urging the District to reach a settlement with the Gonzales family and allow the Gonzales boys to learn and play alongside their classmates.

On May 25, 2021, the Gonzales family and the Mathis Independent School District entered into a settlement agreement granting all three Gonzales brothers a complete victory: a permanent religious accommodation for their religious promise.

Becket to Texas School: Stop bullying boys for their faith 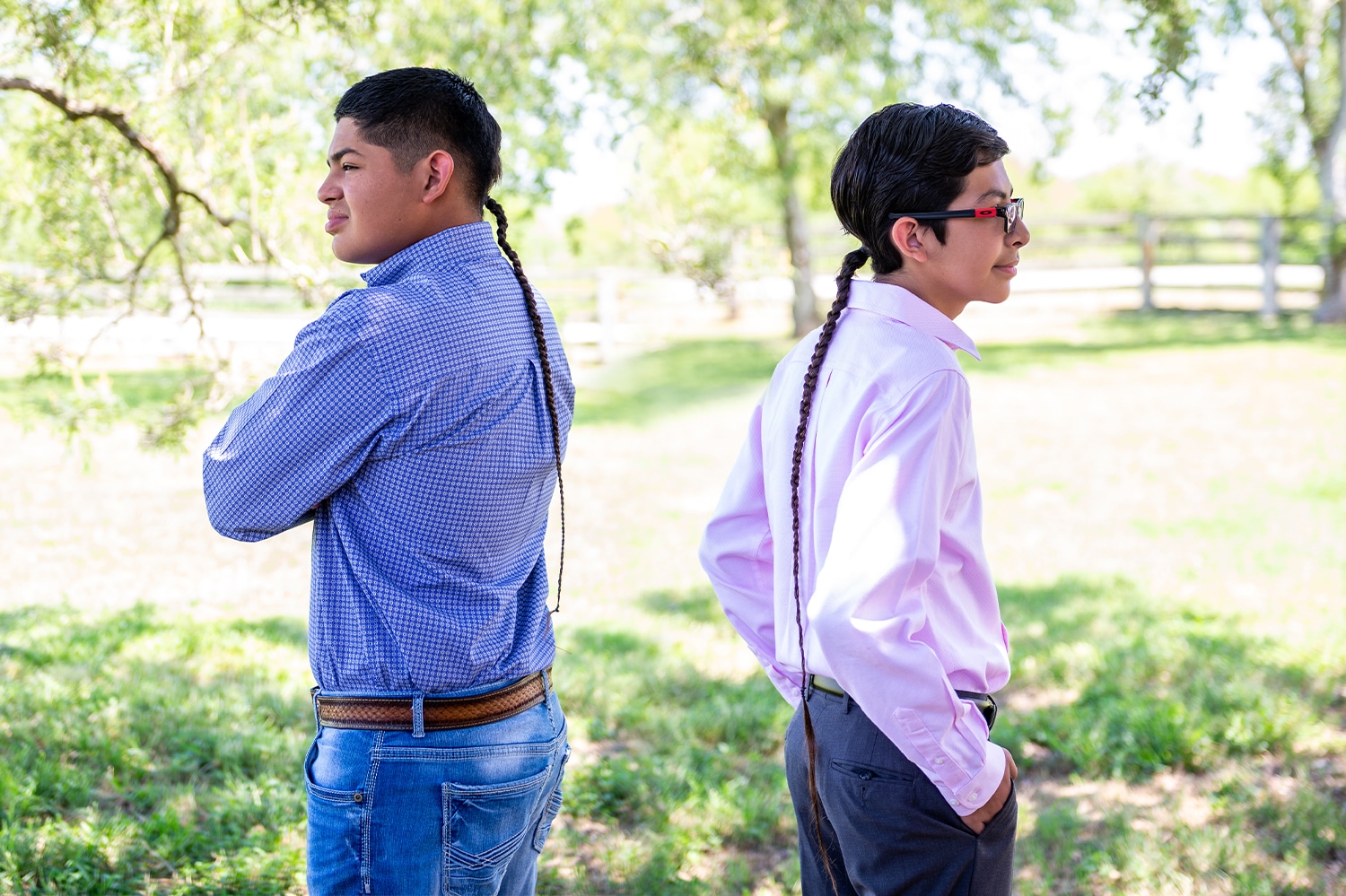 Brothers bound by a sacred promise

When Pedro and Belen Gonzales’ eldest son, Cesar, was an infant, he contracted a very serious illness. Longing for his recovery, Pedro and Belen made a religious promise that if their son’s health improved, they would keep a strand of hair on the back of his head uncut as an expression of faith and gratitude. After Cesar recovered and their second son, Diego, was born, the family continued the practice as a deeply important and personal part of their religious faith. As they grew older, both boys continued to keep a small strand of their hair uncut, committed to living out their family’s sacred practice.

From kindergarten through sixth grade, the local school district allowed the boys to keep their long hair—despite a dress code requiring boys to have short hair—because the school recognized that the religious promise was an important part of their identity. The boys were active in many afterschool activities, such as football, the robotics team, and student government.

Forced to sever a core part of their identity

In August 2017, as they were entering the seventh grade at Mathis Middle School, the Gonzales brothers were suddenly told that they would no longer be allowed to keep a strand of their hair uncut. The Gonzales family appealed the decision but were eventually denied by the school board. The boys were banned from all University Interscholastic League (UIL) interschool competition in sports and clubs, which meant they couldn’t play on the football team or travel with the robotics team. Cesar’s grades even began to suffer when he was excluded from band performances—a core part of the academic band grade.

The Texas Association of School Boards instructs school districts that they “must accommodate requests for exceptions [from grooming codes] based on a student or parent’s sincerely held religious belief.” But the boys’ school district has refused to follow this recommendation. The school’s coaching staff even told Cesar, “All it takes is a quick snip of the scissors for you to get your football equipment.”

On May 30, 2018, the Gonzales family sued the Mathis Independent School District on behalf of their sons, arguing that the school’s stubborn adherence to their grooming code imposed a burden on the family’s religious practice.

On July 15, 2019, Becket sent a letter to Mathis Independent School District, urging the District to reach a settlement with the Gonzales family and allow the Gonzales boys to learn and play alongside their classmates.

When the District refused, the federal court on September 5, 2019, granted the family’s request for a religious accommodation allowing participation in extracurriculars while the case proceeds. Finally, on May 25, 2021, the Mathis Independent School District entered a settlement agreement resolving the case. The District paid $20,000 to cover the family’s attorneys’ fees and promised to respect the Gonzales brothers’ religious practices for the duration of their enrollment. The Gonzales children can now fully participate in the life of the school while keeping their religious promise.