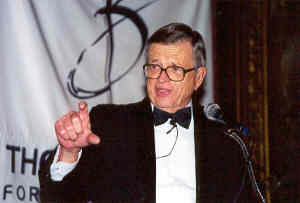 His public conversion to a life of faith reverberated throughout American culture, and his work on behalf of countless marginalized and uplifted spirits. As the founder of Prison Fellowship Ministries, Colson brought his faith into the public square and refused to back down when his ministry faced lawsuits that alleged a violation of the Establishment Clause.

Colson was an intellectual giant whose contributions were honored with prestigious awards such as the Templeton Prize, the Presidential Citizens Medal, and numerous honorary doctorates.

In 2001, the Becket Fund awarded Colson its highest honor, the Canterbury Medal, for his contribution to the cause of religious freedom. Colson promoted religious freedom until his last days through his countless books and articles as well as through his influential radio and web presence, BreakPoint. In 2011, Colson delighted attendees of the Becket Fund’s Canterbury Medal Dinner honoring Eric Metaxas with the video below. Colson will be a sorely missed presence defending religion’s rightful place in American public life.