Religious Liberty and the Same-Sex Marriage Cases: the Arguments The best course for dealing with the deep-seated social and moral differences lurking within these cases is to allow the political process time and space to work. 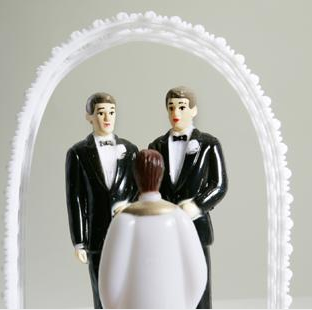 The briefing is now complete in the same-sex marriage cases to be argued on Tuesday and Wednesday at the Supreme Court, and we have seen a number of responses to the amicus brief submitted by the Becket Fund. The Becket Fund does not take a position on same-sex marriage as such, but is concerned instead about the religious liberty implications of recognizing same-sex marriage. In our brief we pointed out that one rational basis for Congress and the voters of California to preserve the previous definition of marriage was the realization that if same-sex marriage were recognized by court action, a whole host of religious liberty conflicts would logically follow. We therefore urged the Court to allow the political process time and space to carefully balance competing societal interests, including religious liberty, rather than constitutionalizing the issue, removing it from the political process, and thereby creating a frozen conflict similar to the one that prevails with respect to abortion.

For an issue that garnered only footnotes in the parties’ briefing, there was a remarkable amount of amicus briefing on religious liberty, responding both directly and indirectly to our brief. In this blogpost, I will summarize the main arguments made in opposition to our brief and provide some responses. I have attempted to make a comprehensive review, but given the sheer volume of briefing in this case, I may well have missed some religious liberty briefing; I also have not attempted to describe every single religious liberty-related argument here. The opposing briefs fall into four main categories:

Briefs that whistle past the graveyard. These briefs mention the religious liberty issue, but assert in a perfunctory way that there are no real religious liberty concerns involved. Typical of this genre is the amicus brief of the United States in the Prop 8 case. In footnote 7, the United States refers to potential religious liberty problems, but dismisses them by quoting dicta from the California Supreme Court’s In re Marriage Cases decision: “no religion [was] required to change its religious policies or practices with regard to same-sex couples, and no religious officiant [was] required to solemnize a marriage in contravention of his or her religious beliefs.” As we point out in our brief, the issue is not the ability to adopt a religious policy, but the ability to carry out that policy in the wider world without civil liability or government penalty. And as we also point out in our brief, the solemnization issue is a red herring. The dicta in In re Marriage Cases are thus irrelevant to the concerns we raised in our brief. Finally, the United States says that religious liberty motivations for voting for Prop 8 would constitute “private biases” and therefore not provide a legitimate justification for the law. But we aren’t talking about the protection of particular religious beliefs, but the protection of religious liberty which is of course a public, and vitally important, interest, one enshrined in the First Amendment. Seeking to protect religious liberty is hardly “private bias.”

Other briefs also try to wish the religious liberty issue away. The Brief of Ken Mehlman and others says that religious liberty is a legitimate concern but, in what can only be called an ipse dixit, is “convinced” that adoption of same-sex marriage will pose no threat to religious liberty. The Brief of Former Senators also focuses on the solemnization red herring, saying that there will be no religious freedom problem because religious organizations can decide which marriages to officiate or not. Two other briefs, from foreign law scholars, and from international human rights advocates make the same mistake, irrelevantly arguing that foreign jurisdictions have not forced clergy to officiate over same-sex marriage ceremonies.

Briefs that say anti-discrimination laws make religious liberty concerns irrelevant. In this category are the Brief of the Episcopal Bishops of California and others, the Brief of the Anti-Defamation League, and the Brief of the California Council of Churches, all filed in the Prop 8 case. These briefs respond directly to the Becket Fund’s brief by stating that religious liberty concerns could not legitimately support adoption of Prop 8, because Prop 8 did not change existing protections for civil unions under California law. Thus these briefs claim that the discrimination statutes will apply in the same way both with or without Prop 8; in their view, it was therefore irrational for voters to be concerned about the religious liberty effects of same-sex marriage in California.

These briefs are wrong. First, they ignore the fact that the Prop 8 case is not just about Prop 8. If Prop 8 is invalidated, it is quite possible that the rationale for other state traditional marriage laws will be fatally undermined. Just as Roe v. Wade was not just about the Texas statute at issue there, the marriage cases are not just about Prop 8 and DOMA. Thus the anti-discrimination laws of other states are very important to the prudential decision before the Court, which is why we listed many of them in the appendix to our brief.

More fundamentally, these briefs display an ignorance of what is really at stake for religious organizations in the Prop 8 litigation. With same-sex marriage, the relevant laws in a few jurisdictions may be largely unchanged–though the vast majority will in fact change–but the religious problems will be fundamentally different. For many religious organizations, recognizing a relationship as “marriage” is a very different, and much more momentous, thing than recognizing it as a civil union, because marriage already has a specific meaning within that set of religious beliefs. For example, in the Catholic tradition, use of the word “marriage” can create a greater level of “scandal”—a stumbling block to the faith of others—than a civil union might. This is true for other religious traditions as well. Moreover, forcing religious officials to contradict themselves over what relationships they describe as marriages—one definition from the pulpit and another in managing church employees or interacting with the outside world—makes it much harder for a particular religious organization to teach its message, both to its own adherents and to the rest of the world. Finally, municipal non-discrimination ordinances in California that bar gender and marital status discrimination but not sexual orientation discrimination will be triggered by invalidation of Prop 8. Prop 8 therefore makes a significant difference, even with the California civil unions statute.

Briefs claiming that religious liberty is not a legitimate governmental interest supporting DOMA. Though there are others, the main brief making this argument is the brief filed by the Anti-Defamation League and others in the Windsor case.

Perhaps chastened by the existence of the First Amendment, the brief grudgingly admits that “protecting religious liberty could in some circumstances be a legitimate government interest”; but then it says that DOMA does not further that interest. First, the argument goes, DOMA cannot protect religious liberty because it does not protect “equal liberty” for religions that favor same-sex marriage. This badly misunderstands our argument. Keeping DOMA as it is today does not subject any religious organizations or individuals to liability for acting in accordance with their religious beliefs. No church is being sued for discrimination because it proclaims its religious belief in same-sex marriage (nor should it be); they have perfect liberty. But exactly the opposite will occur where same-sex marriage is adopted without protections for conscientious objectors—churches, synagogues, and other religious organizations will be sued. Religious liberty concerns what the government does to religious people, not whether religious people see their policy preferences become law.

Finally, in a further indication of its unreliability, this brief also refers to “the Becket Fund’s own religious perspective.” But as many of the amici on the brief know well (though perhaps not their counsel at Ropes & Gray) this is a false statement: the Becket Fund does not have a religious affiliation, it includes staff members with very different religious backgrounds (including Protestant, Catholic, Jewish, and Muslim staff), and it represents people from a great variety of faith traditions in seeking religious liberty, including people with opposing views on same-sex marriage.

In response, we would say two things. First, one of the questions we address in our brief is whether there was a rational basis for Prop 8 and DOMA. The AJC brief does not address rational basis analysis because it holds that heightened scrutiny is appropriate for sexual orientation claims under the Equal Protection Clause. The two briefs thus talk past each other when it comes to the appropriate level of scrutiny. Second, the AJC brief says the Court should “take responsibility” for the predictable effects on religious liberty if same-sex marriage is adopted, but it is hard to see how the Court might do so in the cases before it. As we argued in our brief, the more reliable course for protecting religious liberty is to leave the question of same-sex marriage within the political process where legislative accommodations can be worked out.

To sum up, the question of religious liberty is very much before the Court, despite the parties’ relative silence. The briefs submitted in opposition to our amicus brief contradict each other—some say nothing to see here, move along; others say there are religious liberty problems but they are justified, or that they just need watching. None of them convincingly refute our brief. As we said there, the best course for dealing with the deep-seated social and moral differences lurking within these cases is to allow the political process time and space to work. The alternative is to corrode the foundations of the American democratic polity by ending the debate prematurely and turning a largely solvable conflict into one that is intractably frozen.