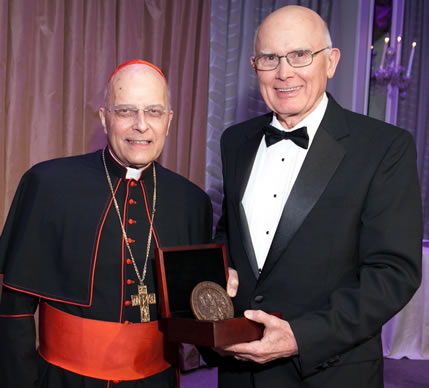 Past Canterbury Medalists include Nobel laureate Elie Wiesel, Prison Fellowship founder the late Charles Colson, financier Foster Friess, Archbishop Charles Chaput and the  former Ambassador to the Vatican, James R. Nicholson among others. Though diverse in religious beliefs and background, medalists share a common love of liberty and freedom of conscience for people of all religions.

“Elder Oaks is a most deserving medalist,” said Bill Mumma, President of the Becket Fund for Religious Liberty. “Beyond stewardship of his own faith, Elder Oaks has actively built partnerships across religions for the sake of freedom. It is a great testament to his work that our dinner this year drew a record number of supporters.”

In the black-tie Gala packed with more than 500 prominent religious leaders and supporters of Becket, Elder Oaks commissioned the diverse group to, “unite to strengthen our freedom to teach what we have in common.”  “We must walk shoulder to shoulder on the same path in order to secure our freedom to pursue our separate ways when that is necessary according to our distinctive beliefs,” he added.

Guests at the dinner, including religious leaders, lay believers, and supporters of religious liberty, expressed their admiration of Elder Oaks and his work.

“I have come to know and to esteem the leadership of Elder Dallin H. Oaks,” said Cardinal George, Archbishop of Chicago, who presented Elder Oaks the Canterbury Medal.

Bill Mumma acted as the lively MC of the event. Remarks were also given by Reverend Eugene Rivers III and Rabbi Meir Soloveichik.

Becket is a non-profit, public-interest law firm dedicated to protecting the free expression of all religious traditions—from Anglicans to Zoroastrians. For 18 years its attorneys have been recognized as experts in the field of church-state law.  The Becket Fund recently won a 9-0 victory in Hosanna-Tabor v. EEOC, which The Wall Street Journal called one of “the most important religious liberty cases in a half century.”