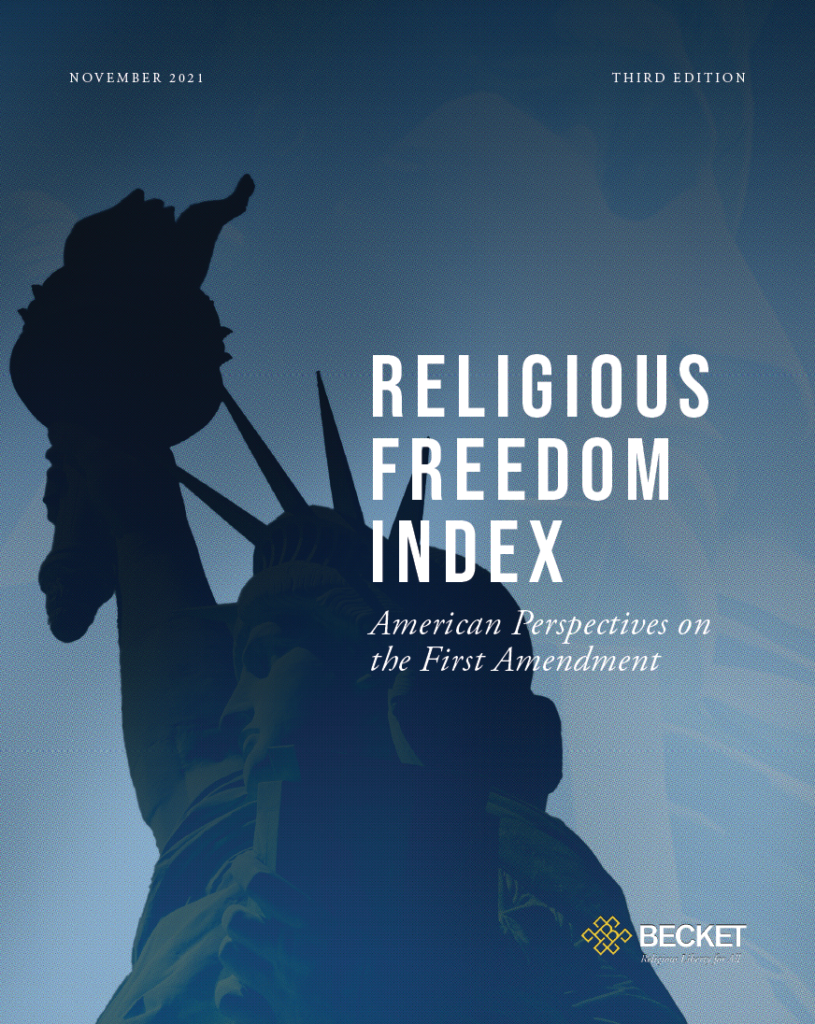 WASHINGTON – Becket has just released the third annual Religious Freedom Index, the only annual poll that tracks trends across the full spectrum of opinions on American religious freedom. This year’s Index reached a new high as Americans bounced back from a uniquely divisive year with revitalized support for religious liberty. In addition to the Index’s standardized annual questions, this year Becket also asked about Americans’ opinions on faith-based organizations, free speech, and the pandemic.

“As Americans bounce back from a divisive year, we see an increased commitment to a wide range of religious freedom principles,” said Luke Goodrich, senior counsel at Becket and co-editor of the Index. “This across-the-board support shows a renewed confidence that protecting religious exercise and expression benefits American culture and civic life.”

Asked about the role of faith-based organizations, more respondents than ever before said they think that religious organizations in the community should be just as eligible to receive government funding as non-religious organizations, with a six-point increase to 71 percent. Turning to free speech, a majority of respondents, 62 percent, believe that people of faith should be free to voice their religiously based opinion in public, even on controversial topics. That view extended to the schoolroom, where 63 percent of respondents said that parents are the primary educators of their children and should have the final say in what their children are taught, supporting the freedom to opt children out of public school content parents find morally objectionable.

“After a period where we all have experienced restrictions on daily life at some level, Americans seem more averse to placing restrictions on their neighbors, coworkers and friends for their religious beliefs,” said Katie Geary, content manager at Becket and co-editor of the Index. “As Americans work together to bridge partisan divides, this naturally extends to greater support for religious freedom.”

The Religious Freedom Index is designed to give a holistic view of changes in American attitudes on religious freedom by surveying a nationally representative sample of 1,000 American adults each fall. The Index’s focus on core religious liberty principles, contextualized with questions on some of the year’s most pressing societal issues, provides a yearly cross section of public sentiment on the intersection of law, religion, and culture. The responses to these questions statistically group into six dimensions:  1) Religious Pluralism, 2) Religion and Policy, 3) Religious Sharing, 4) Religion in Society, 5) Church and State, and 6) Religion in Action.

Surveying and scale construction for Becket’s Religious Freedom Index: American Perspectives on the First Amendment are conducted by Heart+Mind Strategies, using an online panel assembled by Dynata. Becket contributes its broad expertise representing people of all faiths in religious liberty cases to ensure that the polling instrument and analysis broadly reflect America’s many diverse religions and the full spectrum of religious liberty issues.