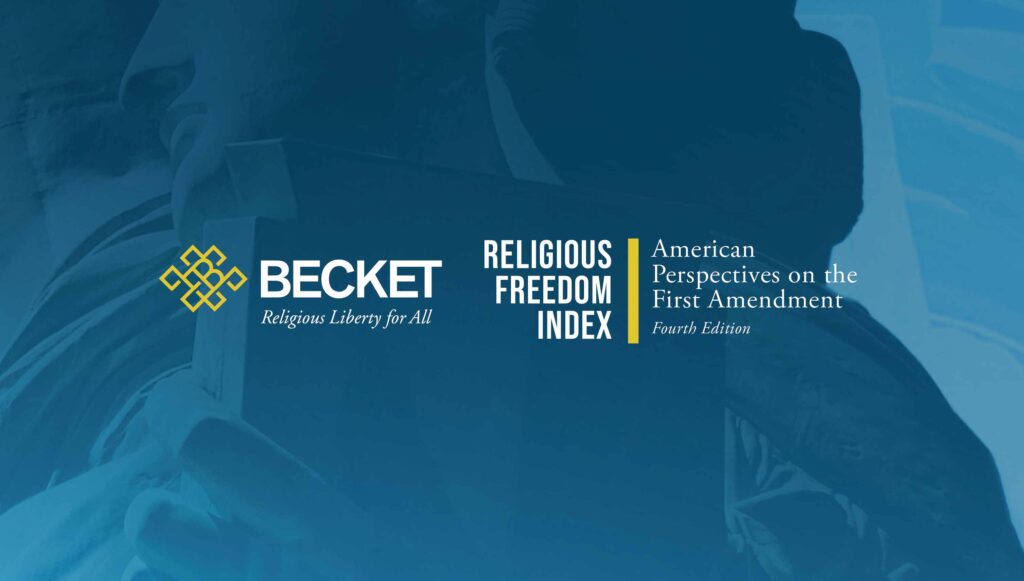 WASHINGTON – Becket just released the fourth edition of the Religious Freedom Index, the nation’s only annual poll that tracks American opinion on religious freedom. The 2022 Index remained at its highest overall score, showing that Americans are unified in their support of religious liberty for people of all faiths. This year’s Index also asked respondents additional questions that provide insight into Americans’ robust support for religious pluralism and minority faith groups.

Backing for religious freedom remained at its 2021 high score of 68 on a scale of 0 to 100. Driving this score was a jump in Americans’ support for people to choose and practice religion without fear of persecution as well as strong protections for lesser-known faith groups. While some dimensions of the 2022 Index lagged prior scores, Americans still strongly support the core pillars of religious liberty.

“The highest level of support for religious pluralism in the 2022 Index is an encouraging sign for the years to come,” said Mark Rienzi, president and CEO of Becket. “Our society can only remain free if we continue to believe that our neighbors shouldn’t have to pray to the same God as we do.”

When asked about religious pluralism, more respondents than ever said that they think people should be free to choose a religion, to worship without fear of persecution, and to practice religion in daily life. Since 2020, this dimension of religious freedom increased by over 10 points, with over 90 percent of respondents completely or mostly agreeing to protect these freedoms.

“Americans’ overwhelming concern for minority religious groups is a key takeaway of this year’s Index results,” said Montse Alvarado, COO and executive director of Becket. “It shows that religious expression does not have to take place within the four walls of a church to have a protected place in our country.”

The Religious Freedom Index is designed to give a broad overview of changes in American attitudes on religious freedom by surveying a nationally representative sample of 1,000 American adults each fall. The Index’s focus on core religious liberty principles, contextualized with questions on some of the year’s most pressing societal issues, provides a yearly cross section of public sentiment on the intersection of law, religion, and culture. The responses to these questions statistically group into six dimensions: 1) Religious Pluralism, 2) Religion and Policy, 3) Religious Sharing, 4) Religion in Society, 5) Church and State, and 6) Religion in Action.