Link: About the Canterbury Medal Gala 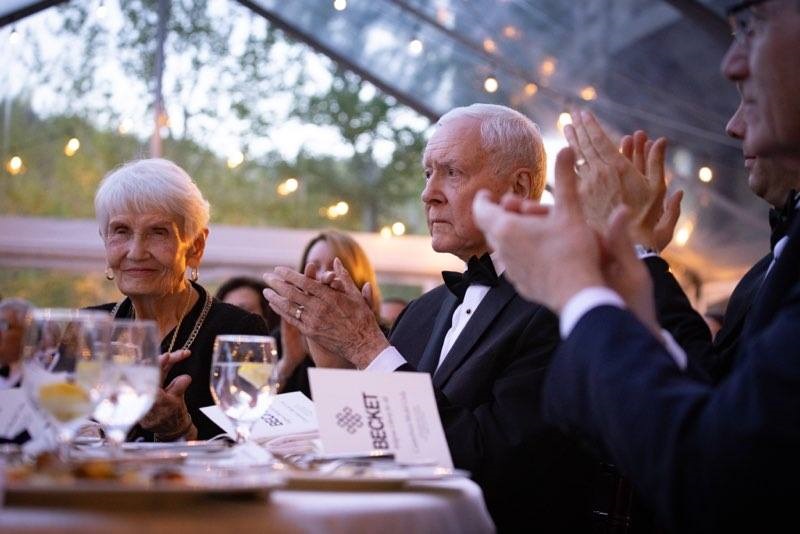 Senator Orrin G. Hatch, who represented Utah in the United States Senate from 1977-2019, was awarded Becket’s highest honor for his unfailing dedication to the defense of religious freedom for all. His principled leadership and legacy of bipartisan lawmaking has helped protect freedom of thought and uncommon religious beliefs to this day. Senator Hatch was honored at last night’s Canterbury Medal Gala in Park City, Utah.

As a United States senator for 42 years and the longest-serving Republican and Utahn senator, Senator Hatch shepherded more than 750 bills into law. One of his greatest triumphs, the Religious Freedom Restoration Act (RFRA), is considered a cornerstone of religious freedom protection for minority faith communities. The legislation was passed by an overwhelming majority of Congress and signed into law by President Bill Clinton in 1993. In 2000, he was the primary author of the Religious Land Use and Institutionalized Persons Act (RLUIPA), which passed unanimously in both houses of Congress.

“I am proud to have preserved religious freedom for people of all faiths through legislation such as RFRA, which is needed today more than ever.  Religious freedom was sewn into the very fabric of this country from the beginning, and protecting the right of conscience for every American is essential to the future of our republic,” said Senator Orrin G. Hatch. “I am humbled tonight to have received the Canterbury Medal, and I take confidence knowing that the defense of religious liberty is in good hands.”

As Chairman Emeritus, Senator Hatch continues his important work through the efforts of the Orrin G. Hatch Foundation, advancing issues relating to freedom of conscience, religion, and belief. He also writes on topics such as politics, law, and faith. Senator Hatch is a faithful member of The Church of Jesus Christ of Latter-day Saints.

“Senator Hatch’s relentless work to pass RFRA unquestionably solidified religious liberty protections for all Americans,” said Mark Rienzi, president of Becket. “Through his efforts, he has helped protect faithful Sikhs serving in the military, Native American worship traditions and sacred sites, prisoners who turn to their faith while incarcerated, and nuns who care for the elderly sick and dying. Without RFRA and without Senator Hatch’s commitment to religious liberty, our freedom of conscience would simply not be what it is today.”

The Canterbury Medal is given to a leading figure who champions a robust role for religion in society and refuses to render unto Caesar that which is God’s. Its name draws from one of the most dramatic religious liberty stand-offs, where the Archbishop of Canterbury, Thomas Becket, repeatedly blocked King Henry II’s encroachments on the church’s liberties. Past medalists include Nobel laureate Elie Wiesel, Rabbi Lord Jonathan Sacks, and apostle and Church of Jesus Christ of Latter-day Saints leader President Dallin H. Oaks.