Hobby Lobby (In)Sanity and the Right to be Wrong By Adèle Keim, Legal Counsel at the Becket Fund for Religious Liberty 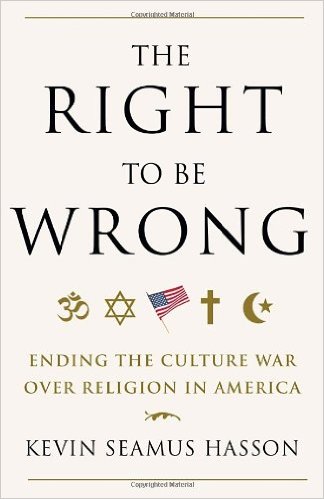 Tired of all the overblown claims about what the Supreme Court actually did in Hobby Lobby? So is the Washington Post. And Politifact. Megan McArdle’s Q & A at Bloomberg is a terrific antidote as well. And of course, you can find Becket’s perspective here.

But the brouhaha about Hobby Lobby raises a bigger question: how do we get along in a nation where we strongly disagree about things like birth control, sex, and religion?

To gain some perspective on the bigger issue, I can think of no better resource than Seamus Hasson’s The Right to be Wrong. First published in 2005 and updated in 2012,The Right to be Wrong takes readers on a journey through the sometimes heartbreaking, sometimes profoundly good ways that Americans have responded to our deep religious differences from colonial times to today. Along the way, Hasson describes some of the more absurd moments in American religious history (such as when city officials tried to ban a group of New Agers from worshiping an abandoned parking barrier in San Francisco’s Golden Gate Park—or when Pittsburgh’s city fathers renamed Christmas “Sparkle Season”).

Hasson’s prescription—that we respect one another’s “right to be wrong” because of who we are as conscience-bearers—has been Becket’s guiding principle for over twenty years. It’s what still drives us to protect religious liberty for people of all faiths, from Anglicans to Zoroastrians. It’s a refreshing dose of sense in the face of the Hobby Lobby hysteria, and a worthwhile addition to your summer reading list.