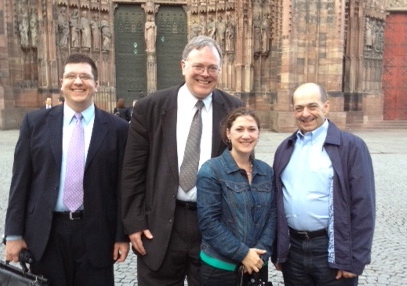 The Sindicatul case concerns a group of priests of the Romanian Orthodox Church who are seeking to form a trade union against the wishes of their bishops. The Romanian courts and the Romanian government found that the establishment of such a “rogue” union would violate the Church’s freedom of religion. The employees appealed to the ECHR, and the Third Section (a smaller panel of ECHR judges) found that the employees’ right to unionize trumped the Church’s beliefs about the duties of loyalty that a priest owes to his bishop. In March, Rassbach and Becket Fund colleague Diana Verm published an article in a Romanian law review, Revista de Drept Social, urging the ECHR’s Grand Chamber to review and reject the Third Section’s decision.

At the Council of Europe, Rassbach was asked to comment on how the United States Supreme Court’s decision in Hosanna-Tabor Evangelical Lutheran Church and School v. Equal Employment Opportunity Commission can shed light on the central questions in Sindicatul. Rassbach remarked that although Hosanna-Tabor dealt with specifically American laws in its decision in favor of church autonomy, the issue is fundamental to maintaining any pluralistic democratic society.

Church autonomy is essential not only for the benefit of the Church, Rassbach maintained, but also for the benefit of the State. Civil officials are ill-equipped to handle affairs of church administration, and doing so implicitly disrupts State neutrality on religious matters. In addition, the internal management of the Church is a private law matter that cannot be practically balanced with greater values of civil rights.

Rassbach also pointed out that church autonomy is necessary for pluralistic democracy as Europe and America become increasingly religiously diverse. Especially under such conditions, he said, it is “untenable and unjustifiable” for the State to involve itself in the inner workings of a particular church. To ensure neutral treatment of all religious groups and individuals, the State must keep its distance from any church’s organization.

The Grand Chamber of the Court will decide during the summer whether to review the Third Section’s decision.