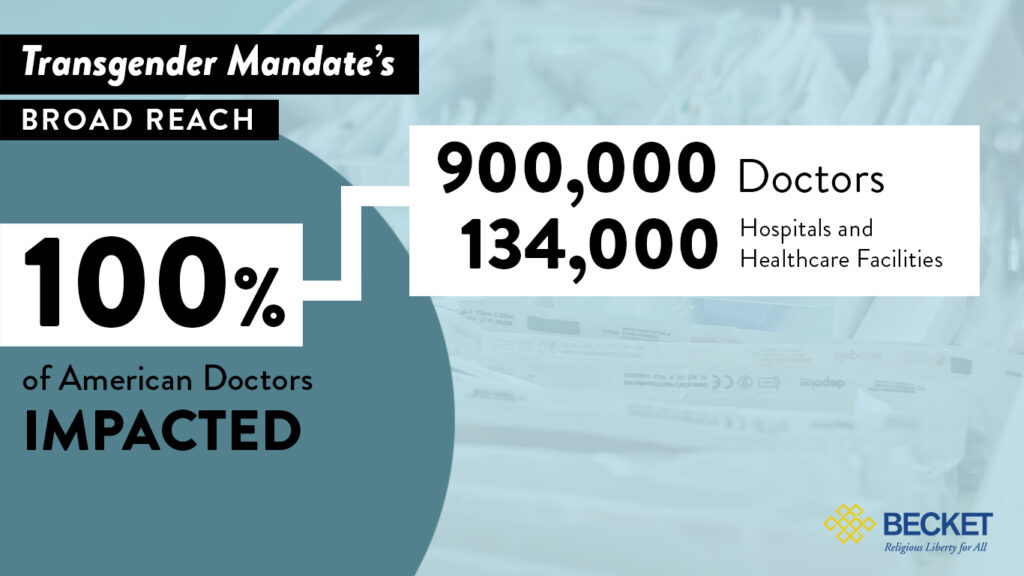 WASHINGTON – Doctors and hospitals were in federal court today to protect both their conscience rights and child patients from unscientific meddling by government bureaucrats. In Franciscan Alliance v. Cochran, a federal initiative known as the Transgender Mandate threatens to drive religious doctors out of practice if they do not perform gender-transition procedures, even if they, exercising their best medical judgment, believe the procedures to be harmful. The mandate first appeared in a regulation issued by the Department of Health and Human Services in 2016, which applied to virtually every doctor in the country, and included no medical-judgment or religious exemptions. Doctors who refused to violate their conscience would have faced severe consequences, including losing their job.

“Medical decisions related to gender transition have serious implications, and it is clearly in patients’ best interests to ensure that doctors are able to serve in keeping with their consciences and their medical judgment,” said Luke Goodrich, VP & senior counsel at Becket. “Government bureaucrats in Washington who want to force doctors to perform controversial, experimental procedures are putting children in harm’s way.”

An association of over 19,000 healthcare professionals, nine states, and several religious organizations filed two lawsuits against the mandate, arguing that it was inconsistent with federal law and required doctors to violate the Hippocratic Oath, which requires doctors to act in the best interest of their patients. In December 2016, two different federal courts ruled that the policy was an unlawful overreach by a federal agency and a violation of conscience rights of medical professionals. Today, doctors and hospitals were in court to seek lasting relief and to protect their informed medical judgment.

“The harmful Transgender Mandate undermines the federal government’s own medical experts’ advice on treating children with gender dysphoria,” said Goodrich. “Yet, politicians and activists are trying to force private doctors, on pain of severe punishment, to perform controversial procedures that can be deeply harmful to patients.”