Court to doctors: you won't be forced to perform gender transition procedures Federal court in Texas hands down big victory for medical judgment and conscience protections 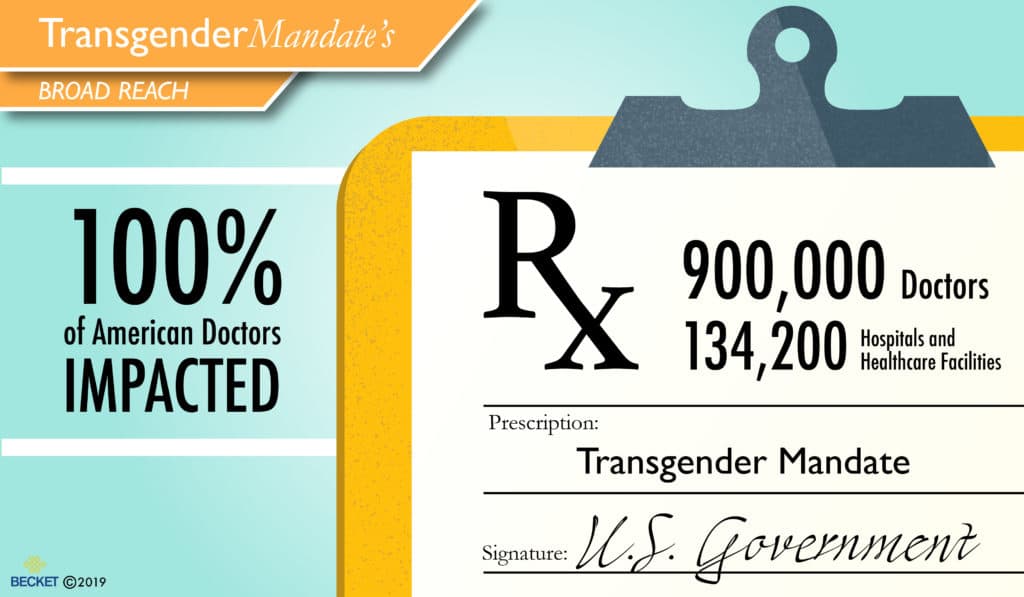 WASHINGTON – A federal court handed down a huge victory today for the conscience rights of medical professionals across the nation. In Franciscan Alliance v. Azar, a federal regulation threatened to drive religious doctors out of practice if they would not perform gender-transition procedures that violate their medical judgment and beliefs, but today’s ruling strikes down the regulation, ensuring that doctors can continue practicing their profession consistent with their conscience.

In 2016, the Department of Health and Human Services issued a regulation, applicable to virtually every doctor in the country, that would have required them to perform gender-transition procedures on any patient referred by a mental health professional, even if the doctor believed the treatment could harm the patient. Doctors who refused to violate their conscience would have faced severe consequences, including losing their job. Today’s ruling that the regulation is unlawful aligns with two previous court decisions, accepted medical research, and a recent HHS proposal, keeping the government out of the private medical decisions of patients.

“It is critically important that doctors are able to continue serving patients in keeping with their consciences and their professional medical judgment, especially when it comes to the personal health choices of families and children,” said Luke Goodrich, vice president and senior counsel at Becket. “Doctors cannot do their jobs if government bureaucrats are trying to force them to perform potentially harmful procedures that violate their medical and moral judgment.”

An association of over 19,000 healthcare professionals, nine states, and several religious organizations filed two lawsuits against the mandate, arguing that it was inconsistent with federal law and force doctors to violate the Hippocratic Oath, which requires doctors to act in the best interest of their patients. In December 2016, two different federal courts ruled that the policy was an unlawful overreach by a federal agency and a violation of conscience rights of medical professionals. In May 2019, HHS released a proposed new rule which would fix the transgender mandate and keep the federal government from interfering in decisions that should remain between doctors and their patients, but the previous rule remained on the books while the proposal was being considered.

“Today marks a major victory for compassion, conscience, and sound medical judgment,” said Goodrich. “Our clients look forward to joyfully continuing to serve all patients, regardless of their sex or gender identity, and continuing to provide top-notch care to transgender patients for everything from cancer to the common cold.”

Today, a Texas judge finalized his previous decision, agreeing with Becket that the mandate burdens religious freedom by forcing doctors of faith to violate deeply held religious beliefs. Becket is currently fighting for the rights of religious doctors in another case called New York v. HHS.