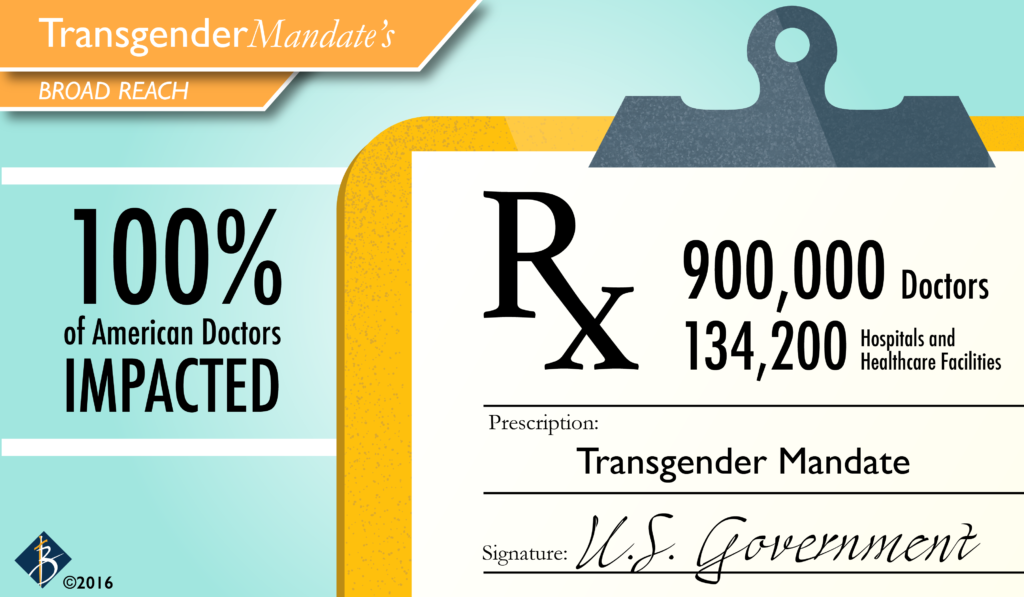 WASHINGTON, D.C. – Over 45 concerned Congressional representatives, led by Congressman Joe Pitts, wrote a letter to Health & Human Services (HHS) demanding clarification on its recent transgender mandate and how it will interfere in doctor-patient relationships and harm children, especially gay and lesbian children.

The letter voices concern that the new HHS transgender mandate forces doctors to perform gender transition procedures on children, even if the doctor believes they could be harmful to the patient, and disregards published medical science and best medical judgment. Members of Congress also highlight the irony of HHS’s refusal to protect decisions that should be left between a family and their doctor considering the government’s own military health plan explicitly protects a doctor’s medical judgement regarding gender transition procedures for service men and women.

“Sensitive, difficult medical decisions should be between a family and their doctor, not government bureaucrats,” said  Lori Windham, senior counsel of Becket, which filed a lawsuit against the new federal regulation. “Doctors should be free to use their best medical judgment, informed by science and led by their Hippocratic Oath, to do what is in the best interest of a child.”

A new website provides leading research on this issue, including guidance the government itself relies on, demonstrating that up to 94 percent of children with gender dysphoria (77 to 94 percent in one set of studies and 73 to 88 percent in another) will grow out of their dysphoria naturally and live healthy leaves without the need for surgery or lifelong hormone regimens. Studies also show that there are numerous negative effects when children undergo hormone regimens, such as increased risk of heart disease, type 2 diabetes, and breast, ovarian, and prostate cancer.

The new regulation applies to 900,000 doctors—virtually every doctor in the U.S. and will cost healthcare providers and taxpayers nearly $1 billion. The government itself does not require coverage of gender transition procedures in Medicare or Medicaid—even in adults—because HHS’s experts “admit clinical literature is ‘inconclusive’ on whether gender reassignment surgery improves health outcomes for Medicare beneficiaries with gender dysphoria,” with some studies demonstrating that these procedures resulted in patients being harmed. But any doctor citing the same evidence and his or her judgment in an individual case would be in violation of the new regulation and face potential lawsuits or job loss.

“The government continues to speak out of both sides of its mouth. The military rightly gives doctors freedom to care for patients according to their medical judgment because it acknowledges the risks of transgender medical procedures, particularly for children; yet HHS tramples on doctors’ medical judgment, even for potentially harmful procedures for children,” said Windham.

Becket is currently defending Franciscan Alliance, a religious hospital network sponsored by the Sisters of St. Francis of Perpetual Adoration, and the Christian Medical & Dental Associations from the new government regulation. The States of Texas, Wisconsin, Nebraska, Kentucky, and Kansas also joined Becket’s legal challenge. More information can be found at www.transgendermandate.org.

For more information or to arrange an interview with a Becket  attorney, please contact Melinda Skea at  media@becketlaw.org  or 202-349-7224.  Interviews can be arranged in English, Chinese, French, German, Portuguese, Russian, and Spanish.