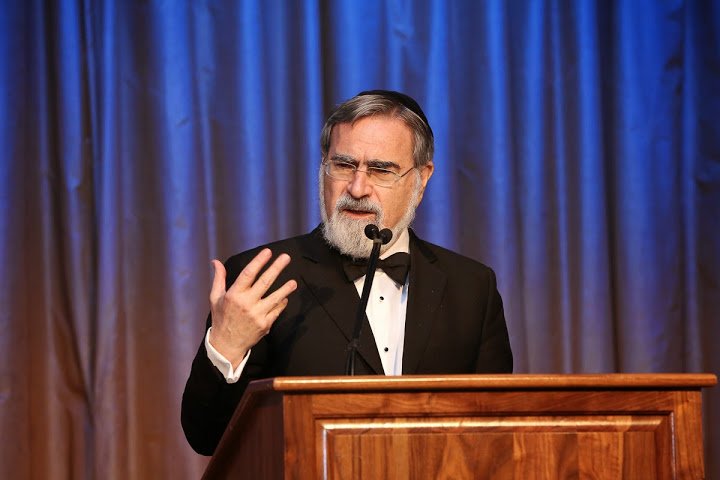 By Lori Windham, Senior Counsel at the Becket Fund for Religious Liberty

Those words came from Rabbi Lord Jonathan Sacks, this year’s Canterbury Medalist. Sitting in the room Thursday night, I watched Catholics, Sikhs, Mormons, Jews and Evangelicals stand together to applaud Rabbi Sacks, who gave an impassioned defense of religious freedom. The entire speech is here, and it is well worth your time.

The event was the Becket Fund’s Canterbury Medal dinner, which the New York Post called “a glittering evening where men and women of strong (and conflicting) beliefs find common ground without watering down their principles.”

Rabbi Sacks’ speech explained why religious freedom, and religious people, are necessary to sustain freedoms of every sort. At the Becket Fund, we have often called religious liberty the canary in the coal mine for other freedoms—when it perishes, other rights are soon to follow. Look no further than the most recent U.S. Commission on International Religious Freedom report, and you will see that the countries most repressive of religious freedom attempt to strip their citizens of other human rights, as well.

But those rights were never the state’s to strip away, because they did not originate with the state. As Rabbi Sacks said, invoking John F. Kennedy, “The rights of man come from the gift of God, and not from the generosity of the state.” He warned that states which forget that lesson are also likely to forget the moral limits of their own power. History is littered with examples.

This is the same argument the Becket Fund has made several times, in what may seem an unlikely place: the controversy over the inclusion of the words “Under God” in the Pledge of Allegiance. How did we get from a discussion of the nature of rights to the thing you recited in elementary school? Because the phrase “under God’ is in the Pledge precisely to remind us of this crucial lesson. “Under God” does not exist to align the United States with any one religious group, nor as the empty gesture of ceremonial deism. It is there to remind us that the state is subject to higher authority, and that our rights cannot be taken by the state, since they were never the state’s to give.

Two weeks ago, the Massachusetts Supreme Judicial Court rejected the latest challenge to the pledge on exactly this basis. The court said that “under God” was “intended to underscore that the American form of government was ‘founded on the concept of the individuality and the dignity of the human being,’ which is grounded in ‘the belief that the human person is important because he was created by God and endowed by Him with certain inalienable rights which no civil authority may usurp.’”

“Under God” is a reminder that, although we may not agree about who God is, or even if He is, we can agree that the state is not the ultimate sovereign. If we forget that lesson, we risk losing much more than a couple of words in a patriotic ceremony.