Another Victory for religious diets in prison - Becket
Skip to Content 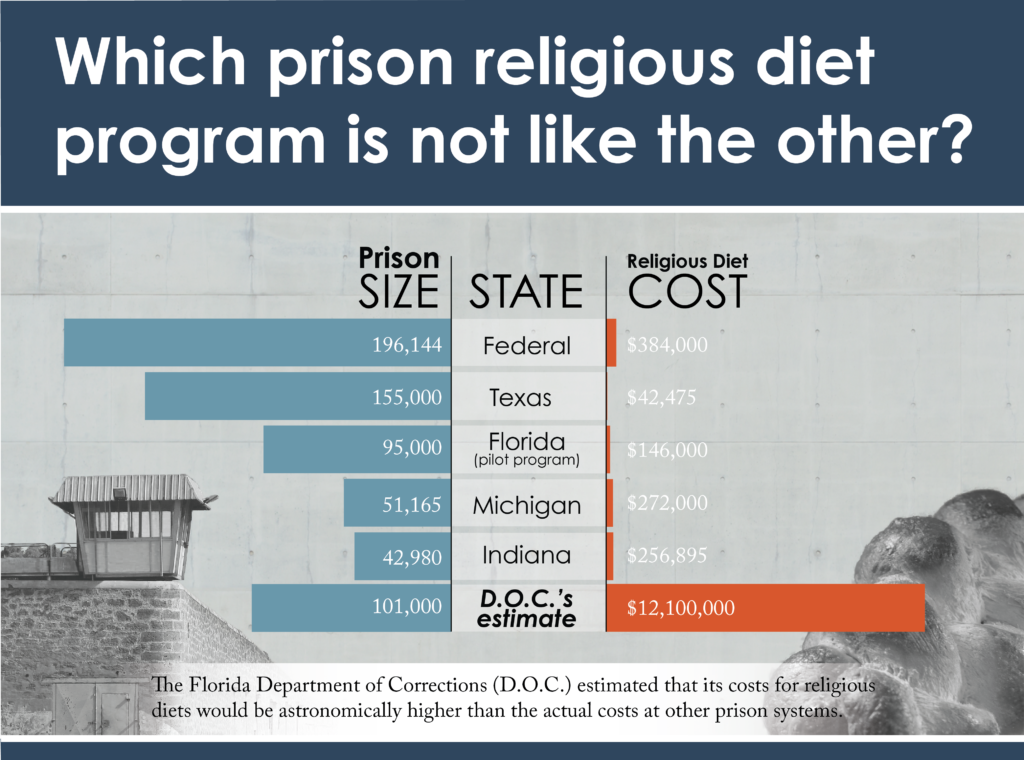 WASHINGTON, D.C. – Today marks the sixth time in three years that federal courts have ruled that the Florida Department of Corrections must provide religiously appropriate meals to prisoners. Until now, the Department remained the only large prison system that offered a variety of diets to prisoners for medical reasons but refused to offer them for religious reasons.

“Studies show that when prisoners are allowed to practice their faith, it reduces violence in prison and reduces rates of recidivism outside of prison,” said Daniel Blomberg, legal counsel of Becket. “Treating prisoners humanely by protecting their religious liberty isn’t only the right thing to do. It is also good for prisoners, good for prisons, and good for society as a whole.”

Thirty-five states and the federal government already provide religious diets. The Department argued that it would be too expensive to do so, but it relied on inflated estimates that were over fifty times more expensive than comparable prison systems.  The Department’s true cost for providing religious diets—only about $1.50 more per day per prisoner than standard meals—is less than 0.02 percent of its multi-billion-dollar annual budget.

Becket, which has successfully represented or supported religious prisoners in Georgia, Texas, Indiana, and in past Florida cases, has never lost a case concerning a prison system’s denial of religious diets.

“When many faithful prisoners are denied a religious diet, they don’t eat food that violates their faith. They go hungry,” said Blomberg. “Today the court upheld the inherent dignity and rights of every person, especially prisoners.”

On April 22, 2016, Becket filed an amicus brief urging the protection of the inmate’s religious rights under the Religious Land Use and Institutionalized Persons Act (RLUIPA).